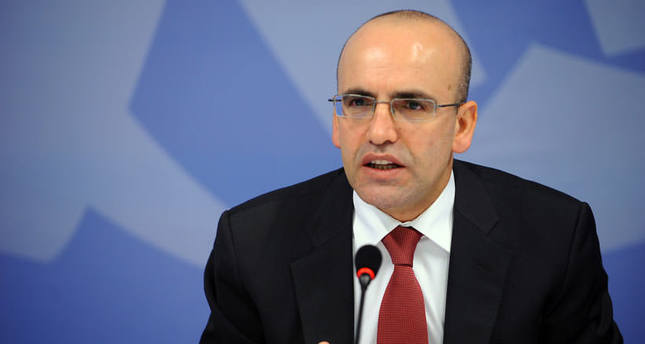 by Daily Sabah with AA Oct 16, 2014 12:00 am
Finance Minister Mehmet Şimşek announced the central administration's budgetary practices for the January-September period. In September, the budgetary deficit and the noninterest deficit were TL 9.2 billion ($4.1 billion) and TL 4.6 billion, respectively. The central administration's budget had a deficit of TL 11.9 billion, while revenues hit TL 313.5 billion, marking an 8.1 percent increase in the first nine months of the year.

Saying that budget expenses and revenues were TL 39.6 million and TL 30.3 million, respectively, in September, Şimşek noted, "In the same month, the budget deficit was TL 9.2 billion, while the noninterest deficit was TL 4.6 billion. For the first nine months, the budget deficit was TL 11.9, while the noninterest surplus hit TL 26.3 billion." Şimşek also said that they had estimated that this year the Turkish economy would grow by 3.3 percent, adding, "No one could foresee the impact of the Islamic State of Iraq and al-Sham [ISIS] on our region, which also has a negative effect on our growth this year." He continued, "We hope the global economy will see a better recovery next year, as suggested by the International Monetary Fund [IMF]. With the decline in oil prices, we think that a growth of 4.4 percent will be quite a realistic forecast for next year."

Underlining that the most severe drought in the past 13 years and geopolitical developments have pushed up food prices, Şimşek said that it would be good to drop inflation below 5 percent in the long run. He noted that tight fiscal and monetary policies will be maintained next year as well.