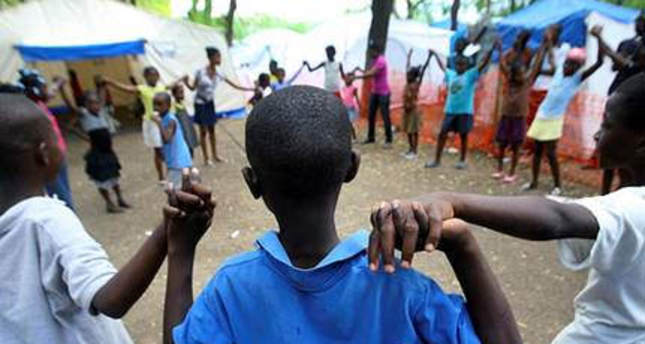 by Daily Sabah with Agencies Oct 29, 2014 12:00 am
The most recent economic crisis has had harsh consequences for children in developed countries. On Tuesday in Rome, the U.N. Children's Fund (UNICEF) said that an additional 2.6 million children have become poor since 2008.

In more than half of the 41 countries in Europe, the Americas and Asia, poverty among children has been on the rise since the 2008 global financial crisis, UNICEF said in a report, citing the latest available data. The situation had deteriorated most sharply in Iceland, Greece, Latvia, Croatia and Ireland. In total, an estimated 76.6 million children are poor, about the same as the entire population of Turkey. While children in 23 out of 41 countries are suffering from poverty due to economic crisis, there was a decrease in the number of poor children in 18 other countries including Turkey in 2012, when compared to 2008. Among those 18 countries, Turkey came ninth after gaining momentum, moving 2.76 percent, according to the UNICEF figures.

UNICEF criticized the decisions of most rich countries that ended stimulus policies in 2010 and adopted austerity policies instead, which led to massive budget cuts that have disproportionally affected children. "Many affluent countries have suffered a great leap backwards in terms of household income, and the impact on children will have long-lasting repercussions for them and their communities," said Jeffrey O'Malley, UNICEF's policy chief. Governments should have worked to decrease poverty during the growth years in order to protect against future shocks, UNICEF said, calling also on governments to guarantee minimum social standards.