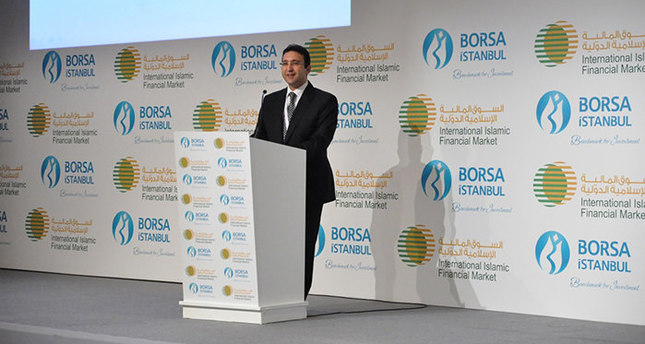 by Cameron Thomas Nov 13, 2014 12:00 am
The Organization of the Islamic Cooperation (OIC) Member States' Stock Exchanges Forum held its eighth annual meeting at Zorlu Center Raffles Hotel on Tuesday to discuss the importance of Islamic finance and its evolving role in the global economy. In his opening speech, Capital Markets Board of Turkey (CMB) Chairman Dr. Vahdettin Ertaş said that legislation regarding sukuk-Shariah-compliant financial assets-was renewed in June 2013, which has allowed new types of sukuk to be regulated and play a larger role in the market. Ertaş also said that due to the development of the legal framework regarding collective investment institutions, participation funds and pension funds are now allowed to invest in regulated interest-free financial instruments. "Interest-free pension funds have been attracting significant interest lately," said Dr. Ertaş, adding, "Since 2012, sukuk amounting to $6 billion have been issued while the private sector has realized sukuk issuances totaling $5 billion."

Professor Salih Tug of Marmara University's Faculty of Theology - the same university which recently held a conference jointly organized with Borsa Istanbul titled, "Islamic Economy and Finance with its International History, Theory and Practice: The Case of Turkey" - in the first session explained how banking has changed in the Western world. Tug described how Christians and Jews in the 15th and 16th centuries were trying to implement interest-free economies, however, "After the 15th century, things changed and the interest-free system was replaced by an interest-based system, which opened the gates to a new capital system which focused on generating and collecting interest."

Borsa Istanbul Chairman & CEO Dr. Ibrahim Turhan said in his opening address, "We have to develop an alternative in order to cope with the existing problems of the world economy ... Islamic finance can be a very good opportunity which will facilitate emerging markets."

Sovereign sukuk assets have been gaining the attention of investors from both Muslim-majority and non-Muslim-majority countries such as Singapore, which was the first non-Muslim country to issue a sovereign sukuk in 2009, Hong Kong and the United Kingdom, which issued its first sukuk assets for 200 million pounds in June, 2014. In October 2012 Turkey became the first Eurpoean economy to issue Shariah-compliant assets. Moody's ratings agency also expects the sukuk market to expand in 2015 - with issuances for 2014 already speculated to be around $30 billion by year end - as more governments seem ready to issue new financial assets.