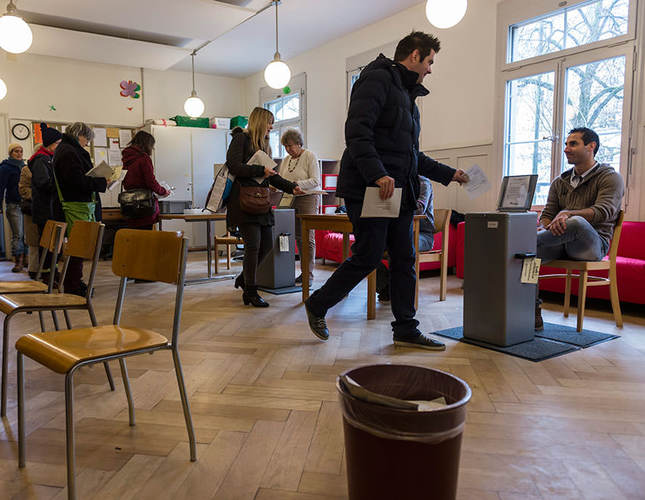 by French Press Agency - AFP
Nov 30, 2014 12:00 am
The Swiss on Sunday flatly rejected a call for dramatic immigration cuts in the name of saving the environment, along with bids to scrap tax breaks for rich foreigners and hike the country's gold reserves.

Results from a majority of the country's 26 cantons showed voters spurning the so-called Ecopop initiative, which called for slashing immigration to reduce urban pressure on the Alpine nation's idyllic landscape.

Initial results nationwide showed 73 percent of voters said 'no' to Ecopop -- far above the 56 percent seen in the latest opinion poll.

According to initial results, 61.6 percent had also rejected the call to ditch tax breaks for wealthy foreign residents, while and 76,8 percent turned down the bid to force the country's central bank to boost its gold reserves to at least 20 percent of its holdings.

While the final results were not yet in, the fact that a majority of cantons had clearly dismissed the three initiatives meant they were doomed.

Most voters in Switzerland cast their ballots by mail in advance, so counting votes can often be done quickly after polls close at noon (1100 GMT) on frequent voting days in the country renowned for its direct democratic system.

Although opinion polls had hinted the Swiss would vote 'no' across the board Sunday, supporters of the Ecopop initiative had voiced hope silent support from the masses would lead to a surprise win.

That happened less than a year ago, when voters in February caught many off guard by voting to impose quotas for immigration from European Union, throwing non-member Switzerland's relations with the bloc into turmoil.

But voters clearly were not swayed by the Ecopop argument that immigrants are swelling the country's population and thus threatening its environment.

According to Ecopop, immigration is adding 1.1-1.4 percent annually to the Swiss population, putting the country on track to house up to 12 million people by 2050.

The campaign wanted to cap immigration's contribution to population growth at 0.2 percent, which after some 93,000 emigrants were deducted would mean an addition of 16,000 people each year and a population of 8.5 million by the middle of the century.

"What I'm worried about is a collapse," Philippe Roch of the Ecopop committee told RTS after the results became clear.
"But clearly this text did not convince voters," he acknowledged.

Indeed, most voters heeded the call of the government, all political parties, employers and unions to reject the initiative, slammed as xenophobic and a threat to Switzerland's economy which depends heavily on immigrant labour.

Christian Luescher, a parliamentarian for the Liberal Party and co-chair of the committee opposing Ecopop, described the initiative as "absolutely absurd", and warned it would "impoverish our country".

Initial results also showed a clear rejection of the bid to scrap tax breaks for rich foreigners living but not working in Switzerland, who today can choose to be levied on their spending rather than income.

Switzerland counts 5,729 millionaires and billionaires with foreign passports, who together pay around one billion Swiss francs ($1.04 billion, 830 million euros) in taxes annually.

That is a far cry from what they would have paid had they been levied at the same percentages as average Swiss taxpayers, according to the left-leaning parties and unions behind the initiative.

But backers of the system insist wealthy foreigners contribute substantially to Swiss tax coffers and inject huge sums directly into the local economy, warning many would leave the country if they face higher taxation.

"People can count," Luescher told RTS as the results ticked in, pointing out that Geneva, where most beneficiaries of the current system live, risked losing hundreds of millions of Swiss francs (dollars) in tax revenue alone if the wealthy residents packed up and left.

Voters also heeded warnings from the Swiss National Bank and economists that forcing the bank to hoard gold and banning it from selling the precious metal would tie its hands and could have disastrous results.

Analysts had warned the bank would be forced to buy around 10 percent of the annual global gold production through 2019 to meet that requirement.