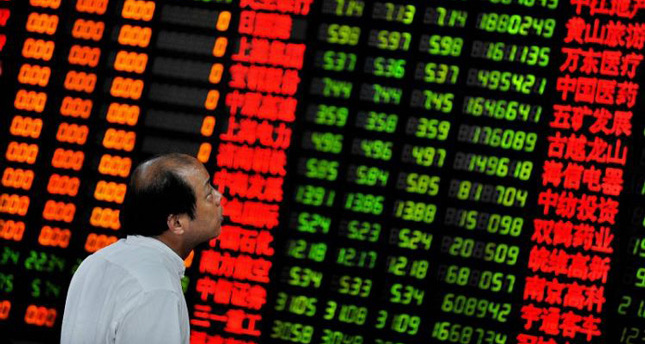 by Associated Press Jan 01, 2015 12:00 am
Chinese stocks surged on the final day of 2014, leading gains in other world markets as investors readied for a year likely to be defined by fragility in major economies. China's Shanghai Composite jumped 2.2 percent to 3,234.68 on Wednesday after a weak manufacturing report reinforced hopes for new stimulus as growth in the world's No. 2 economy slows. The index's gain of about 54 percent for the year makes it the best performing market among major economies. In Europe, France's CAC 40 rose 0.6 percent to close at 4,272.75, leaving it barely 0.5 percent lower over the full year. Britain's FTSE 100 added 0.3 percent to 6,566.09, giving a yearly drop of 2.7 percent. Both traded for a shortened day. Germany's DAX, which was closed for trading, was the stronger performer in 2014, with a yearly gain of 2.7 percent. Wall Street was expected to edge up on the open. Dow and S&P 500 futures were both up 0.1 percent. Most markets will be closed Thursday.

A survey of Chinese manufacturers found their activity contracted in December in a new sign the world's second-largest economy is slowing despite government efforts to shore up growth. HSBC Corp. said its monthly purchasing managers' index fell to 49.6 on a 100-point scale on which numbers below 50 show activity contracting; markets were expecting that outcome since a preliminary version of the survey released earlier in the month also showed a contraction but the confirmation underpinned hopes for more government stimulus in China.

"Heading into 2015, many of the challenges the market has faced this year will be recurring," said Stan Shamu, market strategist at IG in Melbourne, Australia. Analysts say investors will be preoccupied by the slowdown in China, the economic malaise in Europe and Japan, and the possible timing of the U.S. Federal Reserve's first interest rate hike since the financial crisis. "The beginning part of the year will be dominated by Europe and then we'll switch to the U.S. toward the middle of the year," said Shamu.