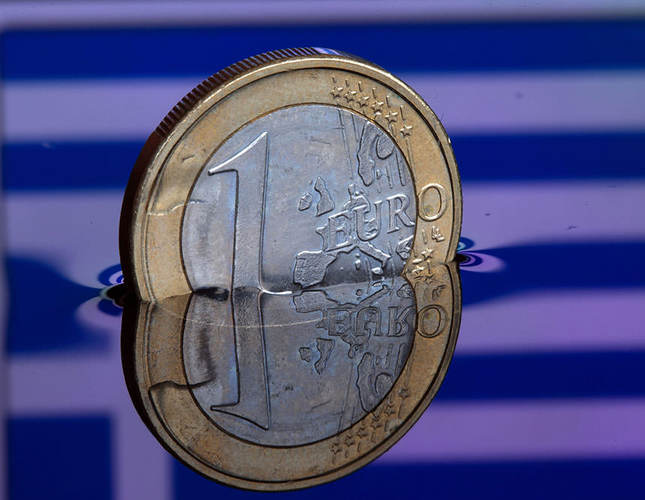 by Compiled from Wire Services Jan 05, 2015 12:00 am
Discussions on if the left-wing Syriza party came into power in Greece the country will go out of eurozone kept the euro under pressure and a sharp decline in commodities stocks viewed yesterday

The euro hit its lowest since early 2006 yesterday, unsettled by the expectations of monetary easing and concerns about Greece that kept the currency under pressure at the back end of 2014. Concerns over Greece's future in the eurozone and a sharp decline in commodities stocks triggered by lower crude oil and metals prices kept European equities under pressure.

The pan-European FTSEurofirst 300 index was down 0.4 percent at 1,357.71 points by 1137 GMT, with benchmark indexes in London, Frankfurt and Paris also falling 0.5 to 0.8 percent. Energy and mining stocks fell the most, with the European oil and gas and the basic resources indexes falling 2.6 percent and 2.2 percent respectively after a supply glut sent oil prices to a 5-1/2-year low and copper hit a 4-1/2-year trough due to a stronger dollar. With political uncertainty in Greece rattling markets before elections later this month, German Vice-Chancellor Sigmar Gabriel said the German government wanted Greece to stay in the euro zone.

The January 25 election in Greece could vault the left-wing Syriza party into power, raising the risk of a sovereign default and severe losses for the European Central Bank on any Greek bonds it holds. "If Greece is seen to be an issue which continues to contaminate the euro zone, maybe it's the time to think more seriously about reforming the euro zone," Peter Dixon, equity strategist at Commerzbank, said. "But I think we will get a little bit less market volatility than we saw some years ago because the systemic risk that Greece poses to Europe is a lot smaller. For example, banks have significantly cut their risk exposure to Greece."

The Athens ATG index fell 3.9 percent, with lenders Bank of Piraeus and Alpha Bank down 5.1 percent and 5.7 percent respectively. However, expectations that the European Central Bank might unveil some extra stimulus measures in a bid to boost the economy and quash fears of a deflationary spiral provided some support to the market. Later in the day, German data is expected to show that inflation fell further in December. Data from five German states on Monday morning showed across-the-board declines, largely a result of falling energy prices. The prospect of cheaper oil and a weaker euro helped travel and leisure stocks rise 1 percent. Carnival, IAG and Air France-KLM rose 2.3 to 3.2 percent, while Ryanair shares, up 2.4 percent, hit an all-time high after the company said December traffic grew 20 percent.

Italian eye wear company Luxottica rose 2.6 percent, also hitting an all-time high, after La Stampa quoted the company as saying it would benefit from a weaker euro/dollar exchange rate in its fourth-quarter results.

The European Union's executive Commission says membership in the euro bloc is "irrevocable" but leaves it open to what extent Greece could renegotiate the terms after the January 25 elections. EU spokeswoman Annika Breidthardt said Monday that if the Greek elections call for a need to look again at the conditions of Athens' membership within the 19-country eurozone, "we will deal with that once the Greek voters have cast their verdict." At the same time, she insisted that a full exit by Greece was not on the cards since the euro rules say that "membership is irrevocable." Some say that if the left-wing Syriza party wins the election in Greece, the new government may renege on the terms of the country's bailout, possibly putting in question its euro membership.

French President Francois Hollande said on Monday countries including Spain and Greece had paid a heavy price to stay in the euro and it was "up to the Greeks" to decide whether to now remain a part of the single currency. His comment in an interview with France Inter radio came in reaction to a media report at the weekend that said the German government believed the euro zone would now be able to cope with Greece leaving the euro.

Germany's economy minister later said Germany wanted Greece to remain in the euro zone and there were no plans to the contrary. "As for Greece remaining in the euro zone, Greece alone can decide," Hollande said. "At this time we should not hypothesize about whether, according to the Greek vote, they would not or would still be a member of the euro zone. The Greeks are free to determine their own destiny."

The question of Greece's continued membership in the euro zone has come into focus ahead of the January 25 parliamentary election that left-wing opposition party Syriza, which has promised to end austerity policies if elected, is seen winning. Syriza leader Alexis Tsipras said in December his party would ask Europe to erase a big portion of its debt.

Hollande, whose Socialist government has criticized Germany's emphasis on budgetary discipline, said: "Europe cannot continue to be identified by austerity."