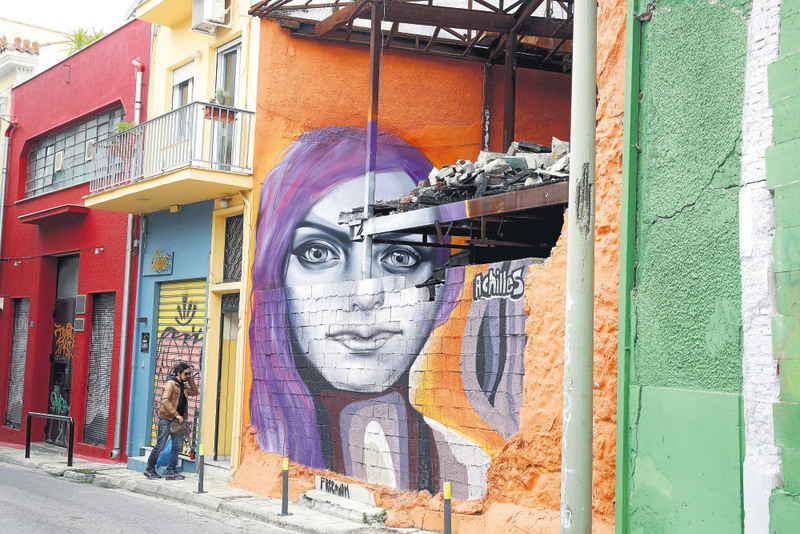 A man walks next graffiti by Greek street artist Achilles, in Athens. Greece has until mid-week to improve a package of reforms required for the release of eurozoneloans that it needs to stay afloat, and which will be a hot topic in Washington.
by reuters Apr 12, 2015 12:00 am

Investors will cast a wary eye on the latest gauges of the U.S.'s economic health this week, while troubled Europe shows early signs of turning the corner. There are reasons for hope in the eurozone

As finance ministers and central bankers from the Group of 20 top economies gather in Washington, on the sidelines of the International Monetary Fund's Spring meeting, they view a subdued global landscape where even the United States' prospects seem tarnished.

For a change, however, there are reasons for hope in the euro currency bloc, despite still low growth and high unemployment. European Central Bank President Mario Draghi will be able to claim an early success in the bank's fledgling money printing program with figures on Friday set to confirm that falling prices throughout the 19-country eurozoneare beginning to stabilise. Bank lending too is improving.

"We're seeing the opposite of 2014," said Carsten Brzeski, an economist at ING Bank. "Now there are more doubts about the U.S. and China than the eurozone." The ECB's long-awaited scheme to buy 60 billion euros a month of chiefly government bonds is also helping to steady nerves in wrangling with debt-strapped Greece.

Greece has until mid-week to improve a package of reforms required for the release of eurozoneloans that it needs to stay afloat, and that will be a hot topic in Washington. Were Greece to tumble out of the currency union, it could upset an already delicate global picture where even the U.S. economy, a beacon of economic strength, is losing some of its shine.

On Tuesday, the United States will release March retail sales data. Although economists expect a rebound, shoppers are being cautious, holding back much of the savings made on lower petrol prices. Consumer inflation, one way of taking the pulse of the economy, has also slowed as oil prices drop. But even stripping out the impact of energy prices and the cost of food, analysts expect only a 0.1 percent month-on-month gain in U.S. consumer prices in March, due on Friday.

Such signs of a sagging economy, including disappointingly low hiring last month, are leading investors to bet that the Federal Reserve will wait before hiking the cost of borrowing until October or even December. Many had previously pencilled in a mid-year U.S. rate hike, which will be the first in more than eight years and likely to send ripples around the globe. For many of the central bankers and officials attending the IMF meeting, the later the United States moves to hike rates the better.

The IMF's economic outlook report, due early in the week, will likely make for sober reading. China, previously the main growth engine for the world economy, is likely to continue to slow despite two recent interest rate cuts.

On Wednesday, the world's second-largest economy will unveil its economic output for the first quarter, alongside readings of factory activity, retail sales and investment. Economists expect growth slowed to 7 percent in January-March. Although far stronger than Europe or the United States, that would increase the chance that China's growth this year will be the weakest in a quarter of a century. "We expect to see two more interest rate cuts this year and larger fiscal spending for the economy, but this will not change the fundamental path of slower growth," said Xiaojia Zhi, China economist at BofA Merrill Lynch. She pointed to central government efforts to tackle high local government debt and an anti-corruption drive as possible drags on investment.

With the eurozone gradually healing, Britain is becoming the focus in Europe as investors brace for volatility in the value of sterling ahead of a tightly contested national election on May 7. The two main parties are close in opinion polls. That makes the outcome unpredictable for a vote that could ultimately determine Britain's future in the European Union, as David Cameron's Conservatives promise a referendum on EU membership if they win. "The classic safety valve is the currency market. We are starting to see some jitters," said Brian Hilliard an economist with Societe Generale in London. "It's going to get very messy this time."
Last Update: Apr 12, 2015 9:06 pm
RELATED TOPICS