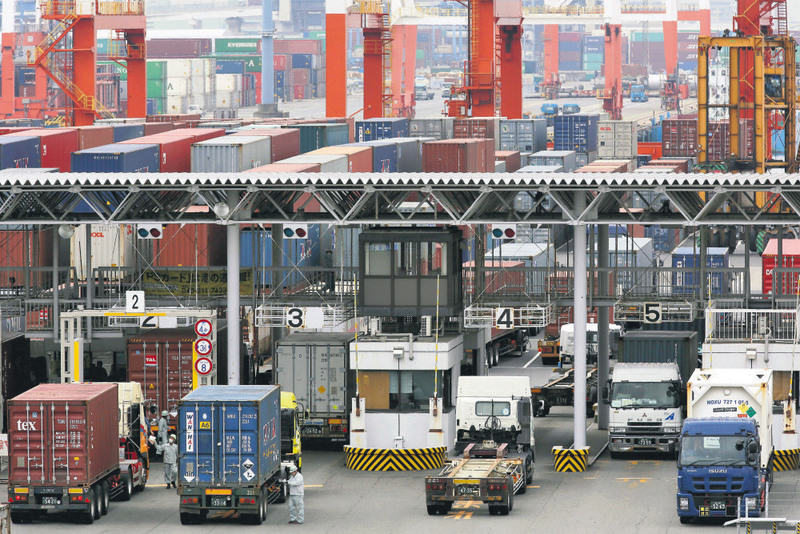 Japanese Finance Ministry data showed exports rose 8.5 percent while imports fell 14.5 percent, leaving a surplus of 229.3 billion yen ($1.9 billion), the first time Japan's trade balance has been in the black since June 2012. The stronger-than-expected figures come after a string of weak data raised doubts about the health of the world's number-three economy, and as Tokyo and Washington emerged on Tuesday from marathon talks on a Pacific-wide free trade area saying they were close to a deal.

Japanese Prime Minister Shinzo Abe is hoping the Trans-Pacific Partnership (TPP), which includes a dozen nations accounting for 40 percent of the global economy, will help him push through reforms to a protected agricultural sector, a key element in his wider bid to stimulate growth.

Yesterday's trade data, which helped drive Tokyo's benchmark Nikkei 225 index to its first close above 20,000 in 15 years, underscored how Japan has seen its whopping energy import bills decline in line with a dramatic slump in world oil prices. But liquefied natural gas (LNG) imports remained high, with utilities forced into thermal power generation due to the country's entire fleet of nuclear reactors still being offline - more than four years after the disaster at Fukushima, the worst atomic accident since Chernobyl in 1986. A weak yen has supported exports, with the value of shipments to North America jumping 22.1 percent last month, while goods bound for the European Union climbed 9.1 percent. Exports to key trade partner China rose 3.9 percent - reversing a month-earlier drop.

Shipments "strengthened largely on solid exports of cars to the United States, the European Union and Asia excluding China, and those of semiconductors and metal working machinery to ASEAN [Association of Southeast Asian Nations] markets," said Harumi Taguchi, principal economist at IHS Global Insight. "The weak yen continued to support export growth." But Japan's trade balance was not likely to stay in the black, economists said. "We expect the yen to weaken further in coming months, which should lift the cost of imports by more than the yen-value of exports," Marcel Thieliant at Capital Economics wrote in a commentary." "The trade balance is unlikely to remain in surplus for long." Japan's premier launched a high-profile policy blitz in early 2013, dubbed Abenomics, in a bid to end years of deflation and tepid growth. The plan initially showed signs of working, with a falling yen sparking a stock market rally while growth in the wider economy picked up. But the campaign faltered after the government raised Japan's sales tax last year to help pay down an enormous national debt. That hammered consumer spending and led to a brief recession, while falling oil prices hurt the Bank of Japan's goal of reaching a 2 percent inflation rate, a cornerstone of Abe's plan. Japan limped out of recession in the last quarter of 2014 with an unimpressive 0.4 percent growth rate. Business confidence has faltered as output at Japanese factories shrank in February, while inflation stalled as a key measure of prices was flat for the first time in nearly two years.
Last Update: Apr 22, 2015 9:57 pm
RELATED TOPICS