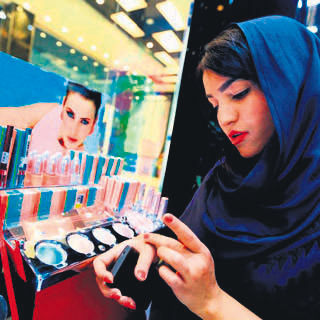 by Özge Yavuz Apr 26, 2015 12:00 am
The Turkish cosmetics industry, which made a major breakthrough in production and exports in recent years, is sought after by Arab women, who are attracted to the sector mainly because of the impact of Turkish TV series.

The Turkish chemical industry, which has seen a boom since 2006, hit $1.4 billion in exports last month and took second place after the automotive industry, relegating the ready-to-wear sector to the third rank. In overall chemical products, cosmetics have achieved the largest growth thanks to the efforts of exporters' associations. The Cosmetics Promotion Group, which was established 1.5 years ago with the intention of introducing Turkish cosmetic products in international fairs, mainly focuses on Middle Eastern markets and achieves great success in a region where Turkish TV series have a great impact.

Turkish cosmetic products, which significantly appeal to Middle Eastern women, have begun contributing to Turkey's objective of having high-value-added exports. Annual cosmetic products exports reached $1.3 billion last year, while this figure was $470 million in 2005. Murat Akyüz, the chairman of Istanbul Chemicals and Chemical Products Exporters' Association, said that Turkey, which was known as an importer of cosmetic products in the past, has become a significant actor in cosmetic production. Underlining the association's notable work to improve the prestige of Turkish cosmetics, Akyüz stated that with the intention of branding the sector, they take part in the world's leading cosmetics fairs, including Italy's Cosmoprof, Dubai's Beautyworld and Cosmoprof Asia, in addition to production development activities being held in many countries. Our cosmetics exporters have also begun trying sales channels in various countries, he added.

According to Akyüz, Dubai's Beautyworld cosmetic exhibition has a key role in the growth of Turkish cosmetic companies' influence in Middle Eastern markets. The influence of Turkish companies has increased in fairs in recent years, said Akyüz, adding that they exhibit their products in an approximately 2,000-square meter area as part of Beautyworld. Describing Dubai as a key market to open up their exports to the Middle East, Akyüz noted that they have ongoing efforts to join similar activities in other countries.
Last Update: Apr 26, 2015 8:58 pm
RELATED TOPICS