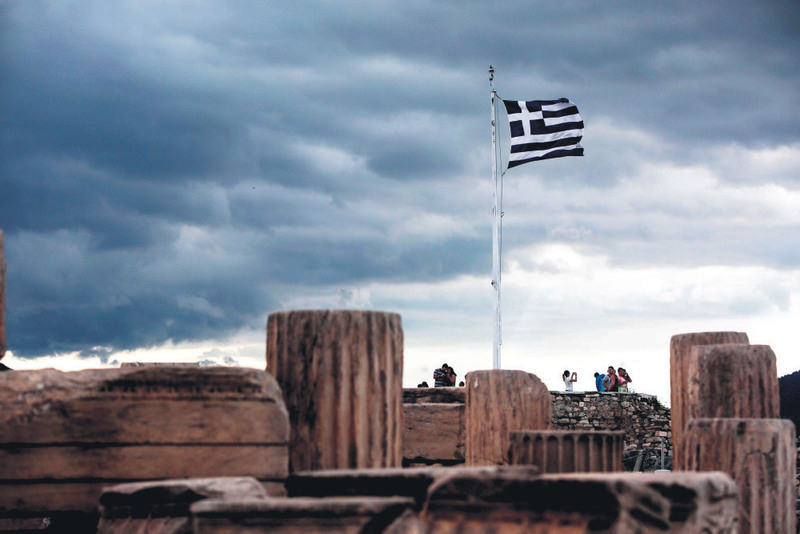 A Greek flag waves in the breeze at the Acropolis in Athens on Friday. Greece bought time in debt crisis negotiations with official creditors when it moved to bundle four looming IMF loan payments into one to be paid by the end of June.
by Jun 05, 2015 12:00 am

The IMF's rare move allowed Athens to avoid a Friday deadline to remit about 300 million euros to the crisis lender as it weighs the newest proposal from its IMF, European Commission and European Central Bank creditors

Raising the stakes in its acrimonious negotiations with international creditors, Greece has decided to postpone payment of the 300 million euro ($338 million) loan -- a highly unusual step, but one that does not yet signal a formal default.

The surprise decision was taken on Thursday, just hours after Prime Minister Alexis Tsipras was presented with a tough compromise deal from lenders that crossed many of his 'red lines', including tax hikes, privatisations and pension reform.

The offer is aimed at staving off imminent bankruptcy, but it has triggered fury in Greece's ruling Syriza party and early elections would be a way to seek public legitimacy for the difficult decisions needed to secure more cash. Greece's bailout expires at the end of June and if no cash-for-reforms deal is done by then, default would seem certain, shunting the euro zone into uncharted waters and opening the way for Greece to exit the single currency.

The Athens stock market fell 3.2 percent in early trade on Friday, while yields on Greek and lower-rated euro zone bonds headed higher in a sign of growing investor unease.

"The lenders want to impose hard measures. If they do not back down from this package of blackmail, the government ... will have to seek alternative solutions, elections," Deputy Social Security Minister Dimitris Stratoulis, a hardliner in the government, told Antenna TV. Greek Economy Minister George Stathakis said the latest deal, drawn up earlier this week by top level officials, including German Chancellor Angela Merkel, was unacceptable, but stressed that his country did not want to leave the euro zone.

"Our government has a mandate to remain in the euro and get a better deal to ... try to change the terms of the agreement that we have with European partners," he told BBC radio. "Greece has to remain within the euro." An opinion poll published on Friday on the website Newsit showed that three out of four Greeks wanted to stay in the 19-nation euro zone, while almost one in two was in favour of the government reaching a compromise deal.

Some 37 percent of people questioned in the Alco survey supported early elections to resolve the standoff. "It is more likely that there will be elections than not," Costas Panagopoulos, head of ALCO pollster, told Greek radio.

Tsipras had indicated late Wednesday that Athens would hand back the IMF loan on Friday, but less than 24 hours later, his government changed direction, deciding instead to bundle together some 1.6 billion euros it owes the Washington-based lender in June into a single payment at the end of the month.

It was the first time in five years of crisis that Greece has postponed a repayment on its 240 billion euro bailouts from euro zone governments, the European Central Bank and the International Monetary Fund. The IMF said the manoeuvre was unorthodox, but permissible.

Stratoulis, close to the far-left of the Syriza party, made clear the decision was a negotiating tactic.

"The government's move is a message that it wants to wait and see how far they (lenders) will take it, if they will back off from this unreasonable, inhumane, colonialist package they are proposing," he said.

With Europe's big powers, and the United States, concerned about the unpredictable outcome as Greek reserves shrink toward zero, sources said the creditors had showed some flexibility this week by lowering the budget surplus that Athens will be required to run before debt service payments.

Sources familiar with the proposal said they now sought a primary surplus of 1 percent of gross domestic product this year and 2 percent next year. Greece has offered 0.8 percent this year and 1.5 percent in 2016. However, since the Greek economy has fallen back into recession, lowering tax revenues, the lower target will still require painful retrenchment.