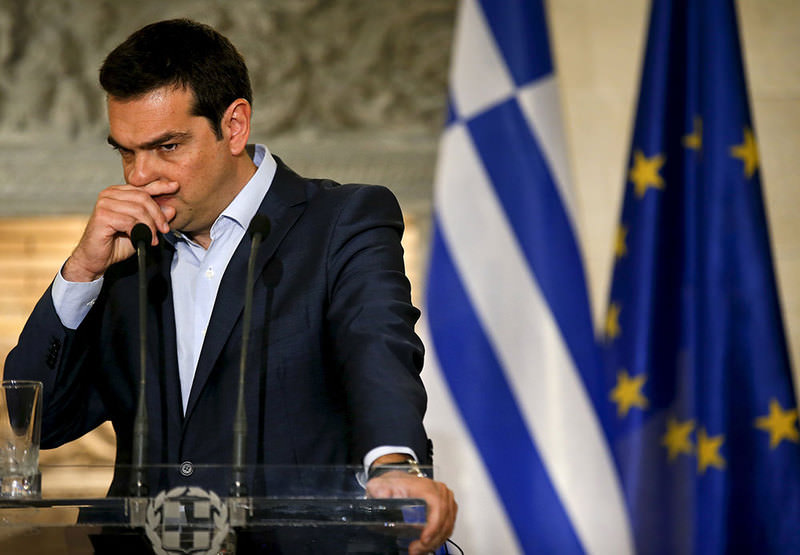 Tsipras is disappointing more supporters as he comes closer to reach a deal with the country’s creditors. While trying to save his country from a default, opposition might occur closer than expected

Greek Prime Minister Alexis Tsipras's new proposals to the country's creditors, who aim to raise 8 billion euros, have increased tensions at home while failing to impress creditors. Tsipras was trying to bridge the differences with creditors yesterday on a plan to implement more reforms in Greece in exchange for bailout loans the country needs in order to avoid a potentially disastrous default next week.

The new proposals depend on new taxes on the wealthy and businesses, VAT increases and a cut in defense spending, officials said.

The International Monetary Fund (IMF) reportedly found the budget savings reforms, which creditors are demanding in exchange for loans, are focused too much on tax increases that can hurt businesses rather than spending cuts. Before leaving for meetings at the E.U's headquarters in Brussels, Tsipras criticized the IMF as being needlessly picky about the reforms Greece had proposed. Tsipras said as long as Athens delivered the right amount of savings, the IMF should have no say in what specific policies a sovereign country adopts. "This odd stance seems to indicate that either there is no interest in an agreement or that special interests are being backed," Tsipras wrote on his official Twitter account. "The persistence of certain institutions not to accept equivalent measures has never been done. Neither in Ireland nor in Portugal," he tweeted, referring to bailouts in those two countries.

Tsipras traveled to Brussels early to meet with the heads of the European Commission (EC), the IMF and the European Central Bank (ECB) to hopefully clinch a deal before an EU summit to be held late Thursday. The finance ministers of the 19 nations of the eurozone were expected to work deep into Wednesday night, after Daily Sabah went to print, to finalize the details of any deal before the leaders open their summit. "Their expectation is not to negotiate," said an EU government official, speaking on the condition of anonymity because of the sensitivity of the talks. "Their expectation is to welcome an agreement."

Greece has a 1.6 billion-euro debt to pay on Tuesday, that it cannot afford unless the creditors unfreeze 7.2 billion euros in bailout money. However, even if Tsipras would be able to convince the creditors to unfreeze the bailout, a new challenge is waiting for him at home. Elected on an anti-bailout platform in January, Tsipras' left-wing Syriza party had promised to scrap all austerity measures and demand forgiveness on a chunk of the country's bailout debt. Now, the party could face difficulty in persuading party lawmakers to back a new deal that must be approved by Monday night. Meanwhile, a Syriza MP has been reported as calling the new proposals a "tombstone for Greece."

Despite the lingering disagreements with the IMF and several EU officials, Greek Economy Minister Giorgos Stathakis said he was confident an agreement could be finalized within the day. "The details are what's left a small gap," he told Mega Television. "It'll be over today."

Athens was forced into concessions by a punishing debt repayment schedule and an economy hammered by uncertainty: A return to mild recession, ratings downgrades and dramatic outflow of bank deposits that threatened to crash the country's financial system. Stathakis insisted that the concessions were mutual. He said Greece had convinced creditors to lower their demands for a primary surplus when not counting interest payments on debt. As a result, that should help the Greek economy grow by 1-1.5 percent this year.

The ECB has had to increase the amount of emergency credit that Greek banks can draw on every working day since Friday. The credit is needed to help the banks cope with deposit outflows. "Bank deposits will return," Stathakis said. "And there will be a return to conditions of liquidity. This time, the money taken out, compared to 2012, is being kept at [home] and not sent abroad. So, I think this was the most balanced agreement that is possible under the circumstances."

The Greek government wants an end to the budget austerity measures that have accompanied the country's bailout loans for five years. It has also been seeking some sort of restructuring of the country's sky-high debt burden, which stands at nearly 180 percent of its annual gross domestic product (GDP).