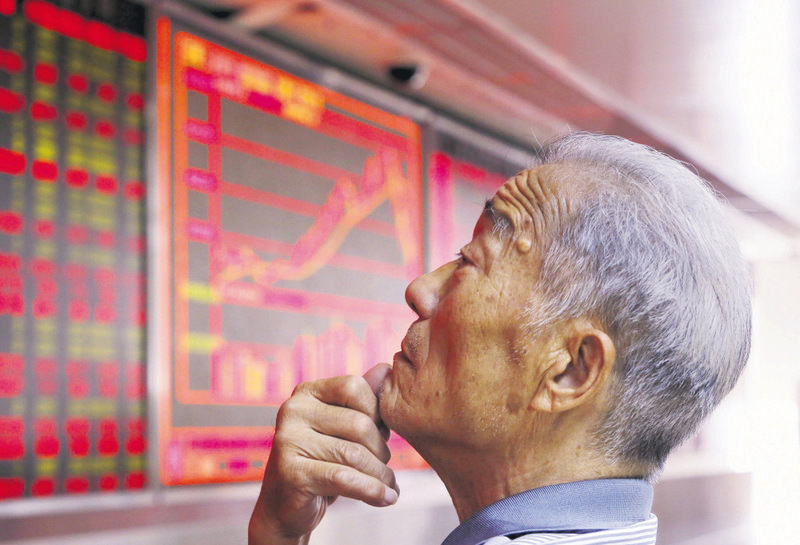 by Daily Sabah with Wires Jul 09, 2015 12:00 am
China has implemented a raft of measures to stop a recent stock market free-fall. But experts and citizens say the government should stop panicking and let the market correct itself.

A quote from China's architect of free market reforms, Deng Xiaoping, has been going viral on the country's WeChat messaging service. "Certain aspects of capitalism can be adopted by socialism. We should not be worried about making mistakes," the late paramount leader said in 1992 about opening a stock market. "If we fail we can close it and re-open it later."

Chinese internet users were sharing Deng's quote to mock recent trading halts that have left more than 40 percent of China's stock market frozen, after recent weeks saw stocks plunge since a peak in mid-June. "These are the world's most extreme sports for your heart: Rock climbing, bungee jumping, skydiving, skiing, surfing and China's stock market," another viral joke said.

China's market regulator has barred major shareholders and executives of listed companies from selling their shares for the next six months, it said in a statement, the latest government action to stem a slide in the markets. The move was aimed to "maintain stability of the capital market and earnestly protect investors' legal rights," the China Securities Regulatory Commission (CSRC) said on its verified microblog late Wednesday.

Even as Chinese stocks rallied yesterday, Chinese citizens continued to criticize the government's aggressive measures to stop the slide on its main stock market. The benchmark Shanghai Composite Index has fallen around 30 percent since June. In the latest measures, China's central bank said it has injected 35 billion yuan ($5.7 billion) into the money market and the bank would allow the national margin trading service provider to issue short-term bonds in the interbank market to replenish liquidity. "The plunge is just a normal correction after stocks were over-inflated for so long," one Chinese investor in Beijing told DPA. "I don't know why the government is panicking." Another investor, Zhao Liqun, said the government was "insane" for loosening margin-lending requirements, saying it would make an existing problem worse. "The problem is that lay-people speculators who have no idea what they are doing are trading on margin because they want to get rich quick," Zhao said. "And the government's solution is to try to prop up the bubble?"

Margin trading, where investors borrow money from brokers to buy stocks, had fuelled recent rises in the stock market and raised concerns that margin debt has created a bubble. Others noted that Chinese premier Li Keqiang, who holds a doctorate in economics, said at the start of his tenure in 2013 that China will allow the market to play a bigger role in economic innovation, implying a reduction in state intervention.

Analysts have also blamed the volatility in Chinese share prices on retail investors, who make up around 80 percent of the mainland market. These investors do not have a comprehensive knowledge of the companies they invest in, and are likely to sell off in a panic.

Many borrow to invest, and need to sell off stocks to make their margins, Ben Kwong, head of research at KGI Securities in Hong Kong, told DPA. The government is concerned about the downturn because a crash could lead to political crisis, Beijing-based independent commenter Zhang Lifan said. "Public trust in the government is already quite low. Many ordinary people, even housewives, have recently invested in the stock market. If they see bad results they could become angry at the government and the government could lose its credibility," Zhang said. But some investors said those who lost money only have themselves to blame. "I have been investing in stock markets in mainland China and Hong Kong for 16 years," said Wang Feng, a Beijing-based investor. "Those who jumped on the bandwagon and chose to buy inflated stocks cannot blame the government for their unwise decisions."
Last Update: Jul 09, 2015 8:29 pm
RELATED TOPICS