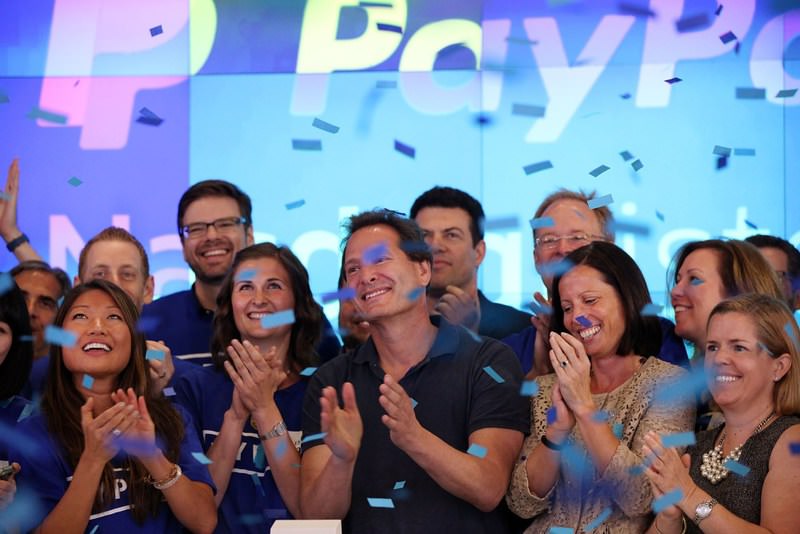 by Anadolu Agency Jul 22, 2015 12:00 am
Digital payment service PayPal returned to the Nasdaq on Monday as an independent company after being owned by auction site eBay for more than a decade and shares promptly shot up 11 percent.

PayPal opened Monday with a market value higher than $46 billion - well above the $34 billion eBay opened with on the day of the break-up. Boosted by bullish analysis expectations, PayPal's market valuation rose to $52 billion throughout the day. PayPal, founded in 1998 by now Silicon Valley icon Peter Theil, was bought by eBay in 2002 for $1.5 billion, mere months after an initial public offering. PayPal has been chafing under eBay's leadership for several years as the latter's growth dipped and the former wanted to focus on mobile payments. The split was announced after notable shareholders, including activist investor Carl Icahn, called for eBay to set PayPal free. With Monday's debut, Wall Street believes PayPal is poised for tremendous growth, especially with a renewed commitment to mobile payments, a field that was reinvigorated by Apple Pay. "As the world's open, digital payments platform and most trusted and popular digital wallet, we are excited to celebrate our listing day and embark on our next chapter," Dan Schulman, PayPal's current CEO, said in a statement about joining Nasdaq again. "Mobile technology is transforming payments, making it easier, safer and more affordable for people to move and manage their money than ever before." During a recent earnings call following the second quarter this year, Schulman claimed that PayPal processed payments totaling $66 billion and saw revenue hit $2.3 billion, a 19 percent increase from the previous quarter. "As an independent company, we see a tremendous opportunity for PayPal to expand our role as a champion for consumers and partner to merchants," Schulman continued, "and to help shape the industry as money becomes digital at an increasingly rapid pace."
Last Update: Jul 22, 2015 1:10 am
RELATED TOPICS