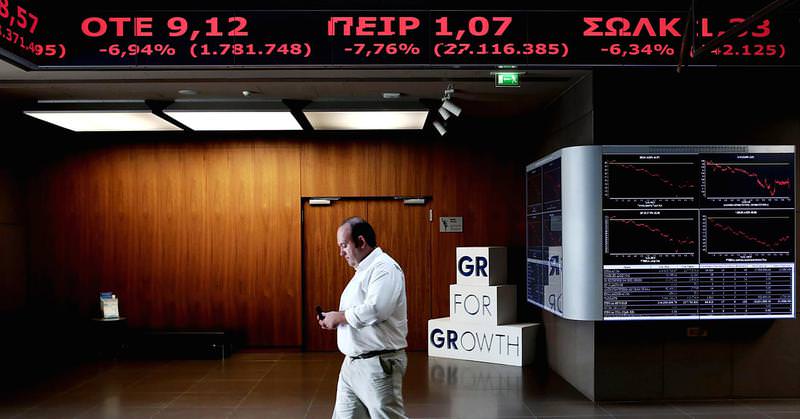 by Aug 02, 2015 12:00 am
Attention is focused on Greece's embattled banks as the Athens stock exchange reopened today after a six-week shutdown over the country's debt crisis.

The banks are in a vulnerable position because of outflows of billions of euros from deposits over the past six months.

Some 40 billion euros has been withdrawn from Greek banks since December, according to the country's banks association.

And according to news reports on Sunday, the top four lenders - National Bank, Piraeus Bank, Alpha Bank and Eurobank - will undergo an asset quality review later this month.

Stress tests will follow in the autumn to determine the recapitalization requirements of each bank with European rescue funds.

Greek officials want to complete the operation before new European regulations come into effect from January 1.

As of 2016, bank shareholders and depositors will foot the lion's share of recapitalization costs - a process known as "bail-in" - instead of European taxpayers.

Greek banks were also recapitalized in 2013 with funds from the country's last EU-IMF rescue package.

The reopening of the market comes after senior EU and IMF auditors held their first meetings with Greek ministers to finalize the new three-year bailout, which could be worth up to 86 billion euros.

The last session was on June 26, a few hours before Prime Minister Alexis Tsipras announced a referendum on the bailout conditions demanded by Greece's international creditors.

Over that weekend, Greeks rushed to bank cash machines, prompting the government to impose capital controls from June 29, followed by the closure of the banks and the stock exchange.

The aim was to protect the banking sector following the huge withdrawals by people nervous about Greece's economic and financial future.

For the duration of the crisis, Greece's banks have been relying on one lifeline: an ECB credit facility called an Emergency Liquidity Assistance (ELA). The Frankfurt-based lender last week left the ELA unchanged at 90.4 billion euros.

The banks reopened after three weeks on July 20, but withdrawals and money transfers abroad remain under tight controls. Greeks can withdraw only up to 420 euros a week. The capital controls were slightly eased for businesses last week but economic activity, especially imports, continues to encounter numerous obstacles.

Founded in 1876, the Athens stock exchange has closed down more than a dozen times in its history, the weekly To Vima reported Sunday, most recently in 2008 owing to a strike by Bank of Greece staff. Other instances include the Balkan Wars of the 1990s, the World Wars I and II, the Turkish invasion of Cyprus in 1974, 1987's "Black Monday" in the United States and the outbreak of a stocks manipulation scandal in 1996. The Greek economy is already forecast to contract by 3 percent this year by the Standard and Poor's rating agency, but extended capital controls and a big bail-in could constrict activity even further.
Last Update: Aug 03, 2015 1:46 am
RELATED TOPICS