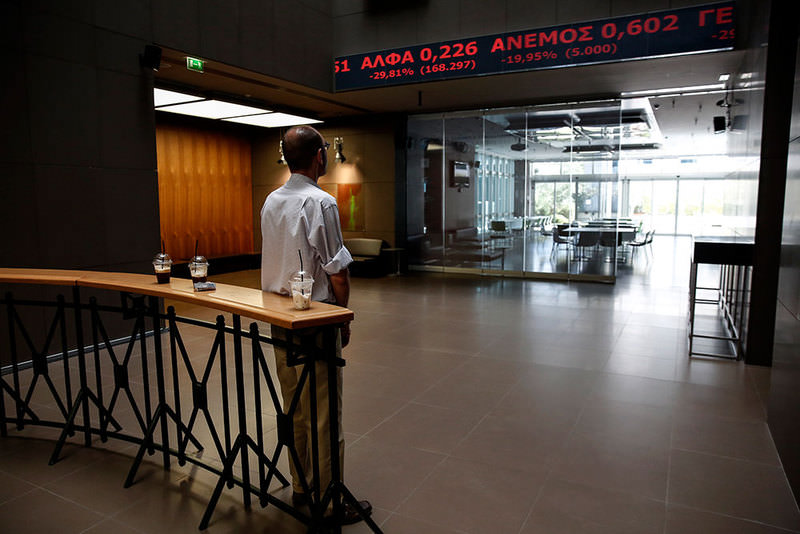 by Aug 04, 2015 12:00 am
Greece's banking stocks plunged for the second day in a row on Tuesday, dragging the main Athens index down and reflecting the country's continuing financial and economic woes.

The banking index, comprising the four major lenders, was down 29.2 percent, virtually at its 30 percent daily limit for losses. It hit the limit on Monday.

The overall Athens General Index was down around 4 percent after opening higher. Some non-financial stocks gained. Gaming group OPAP was up 3.5 percent and Aegean Airlines gained 2.7 percent.

No spillover was evident to other European markets. Many investors have cut their exposure to Greece and are focusing more on the state of core markets such as Germany and France.

The Athens index lost 16.2 percent on Monday, the worst fall on record, wiping out nearly 8 billion euros of market value as investors worried about a new bailout from the European Union and reacted to Greece's worsening economy.

Some believe the rout will soon end.

"The nearly 30 percent drop in early (banking) trades should attract buyers later in the session, helping the banking index balance out at higher levels than this," said Takis Zamanis, chief trader at Beta Securities.

Trading in Athens resumed on Monday after being suspended for five weeks as part of capital controls imposed to stem a debilitating outflow of euros that threatened to cause a banking collapse and force the indebted country out of the euro zone.

Although Athens is in new bailout talks with its European Union partners the threat of political and economic instability remains.

The economy, meanwhile, has reversed course and is heading into recession again.