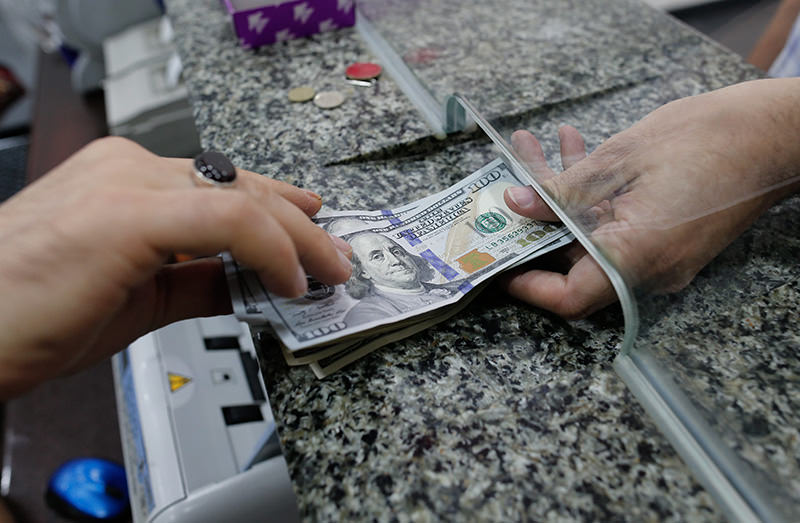 A man exchanges money at a currency exchange booth in Istanbul, Turkey, 13 August 2015 (EPA photo).
by Daily Sabah Aug 17, 2015 12:00 am
The dollar started the week at TL 2.8430, breaking the record once again due to political uncertainty – as coalition talks have failed and the likelihood of snap elections are all but certain – as well as geopolitical risks not fading away.

Within the day, the dollar-lira parity exceeded 2.86. Following the dollar's repeated record-highs against the Turkish lira, Economy Minister Nihat Zeybekci issued calming remarks, stressing that foreign currency exchange levels are nothing to worry about under Turkey's current debt structure. He also assured that markets will find their balance without intervention.

Speaking to reporters after the Turkey-Iraq Business Council meeting, Zeybekci evaluated interest rates prior to today's Monetary Policy Committee meeting and said the rates should decrease in order to provide funds in a plentiful and affordable fashion. However, the Central Bank of the Republic of Turkey's (CBRT) hand is not as strong as it was a few months ago; "therefore, we don't expect such change [in interest rates]," Zeybekci said.

Additionally, he spoke about the devaluation of the Chinese yuan, emphasizing that the Chinese government's recent devaluation decision creates a disadvantageous situation for Turkish goods. This indicates Turkey needs to cooperate instead of compete with China. Zeybekci underscored that there are talks about project partnerships with the Chinese and a trade zone that would be located in Turkey.