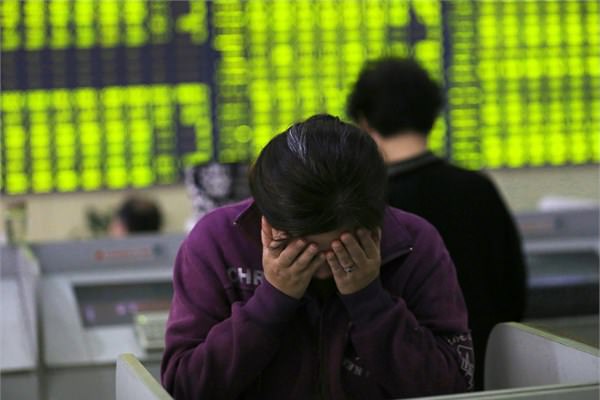 by Aug 24, 2015 12:00 am
 Markets are watching for China's next move as signs of a slowdown in the world's second-largest economy stack up, raising expectations it will act to stoke growth.

A looming snap election in Greece and a closely watched conference hosted by the Federal Reserve in the United States are also likely to keep investors on their toes in the coming week, in particular as they look for hints on when the U.S. will raise interest rates.

Fears that Chinese growth is weakening, dragging down the global economy with it, are hammering commodities and stocks.

Alarm bells rang across world markets yesterday as a near 9 percent dive in China shares and a sharp drop in the dollar and major commodities panicked investors. European stocks were more than 5 percent in the red and Wall Street was braced for similar losses after Asian shares slumped to 3-year lows as a three month-long rout in Chinese equities threatened to get out of hand.

Many traders had hoped that such support measures, which could include an interest rate cut, would have come from Beijing over the weekend after its main stocks markets slumped 11 percent last week. With serious doubts also now emerging about the likelihood of a U.S. interest rate rise this year, the dollar slid against other major currencies.

The Australian dollar fell to six-year lows and many emerging market currencies also plunged, whilst the frantic dash to safety pushed the euro to a 6-1/2-month high above $1.15. "Things are starting look like the Asian financial crisis in the late 1990s. Speculators are selling assets that seem the most vulnerable," said Takako Masai, head of research at Shinsei Bank in Tokyo.

As commodity markets took a fresh battering, Brent and U.S. crude oil futures hit 6-1/2-year lows as concerns about a global supply glut added to worries over potentially weaker demand from the normally resource-hungry China. U.S. crude was last down 3.6 percent at just below $39 a barrel while Brent dropped to $43.74 a barrel to take it under January's lows for the first time. Copper, seen as a barometer of global industrial demand, tumbled 2.5 percent, with three-month copper on the London Metal Exchange also hitting a six-year low of $4,920 a tonne. Nickel slid 6 percent to its lowest since 2009 too at $9,570 a tonne.

Losses in the lira in Turkey were tempered by falling oil prices, which should cut Turkey's current account deficit. Additionally, the price of gold per gram has reached its highest level in history at TL 111.29, as it has been affected by the loss in value of the lira.

By the end of the coming week, attention may shift away to the Rocky Mountains, where policymakers are due to gather from Aug. 27-29 for the Fed's conference of central bankers, finance ministers, academics and financial market participants in Jackson Hole.

Fed chair Janet Yellen is not expected to attend, raising the prospect that other Fed officials may be more tight-lipped about the likelihood of the first rate increase in almost a decade, some analysts said.

The prospect of an increase as soon as September is receding, however.

Last week the Fed released minutes of its July meeting, giving no clear signals as to the timing of such a move - which would affect markets across the world and could cause more pain for emerging market assets, already being hit by China's woes.

Though they were more confident about U.S. growth prospects, the minutes showed, Fed policymakers are concerned about weakness in the global economy - fears likely to have been heightened by Monday's market rout in which the dollar also fell sharply.

Further clues on both matters should be gleaned from data releases in the coming week, including second-quarter U.S. gross domestic product figures due on Thursday.

Quarter-on-quarter growth in the period is expected to be revised upwards to 3.2 percent from 2.3 percent, according to a Reuters poll.

In the euro zone, investors will be looking at an German economic sentiment survey due on Tuesday for a better idea of the scope of the bloc's recovery.

Preliminary August consumer price readings for Germany and Spain on Friday will provide further insight into how effective the European Central Bank's bond-buying efforts have been at warding off deflation.

But the spotlight will mainly fall once again on Greece, where Prime Minister Alexis Tsipras has resigned. That opens the way for early elections after he secured much-needed funds in the country's third international bailout programme.

The current Greek government aims to strengthen its position in the election after accepting a rescue deal it once opposed. But that creates more uncertainty for markets already on edge over whether Greece will deliver on promised reforms and get its economy and banks back on track.