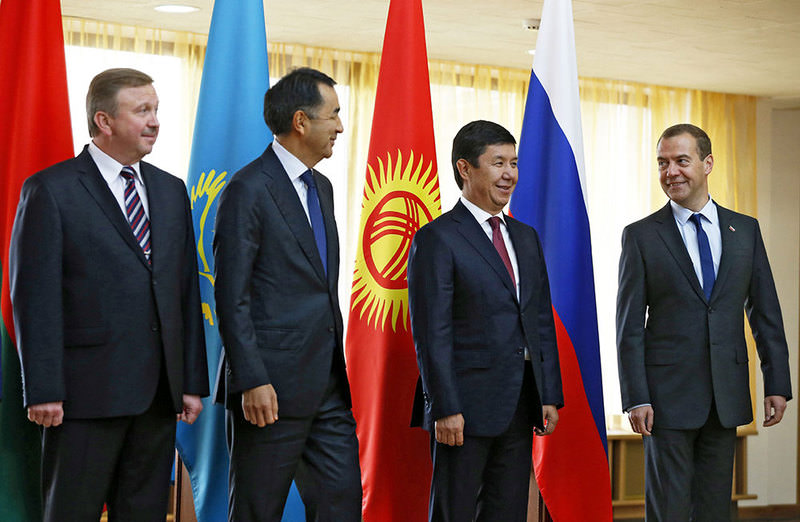 by Daily Sabah with Wires Sep 10, 2015 12:00 am
Russia's President Vladimir Putin has submitted a bill to the Parliament on August 28 to reduce the usage of the U.S. dollar and euro in transactions between the Commonwealth of Independent States (CIS) members amid deepening worries of the global economy, falling oil prices and the West's sanctions aiming to cripple the Russian economy.

The idea of a common currency has long been discussed for former Soviet republics and Asian economies, which are now organized under international organizations such as the CIS, Shanghai Cooperation Organization (SCO) and Eurasian Economic Union (EEU). The latter, which is comprised of Armenia, Belarus, Kazakhstan, Kyrgyzstan and Russia, is more closer to switch to a common currency than the rest, and the proposed name, "altyn," is familiar for Turkish speakers.

Several news outlets from the region reported that the proposed name for the common currency will be a Turkic one, "altyn," the word for gold in Turkic languages, which is planned to be introduced by 2020 or 2025.

The article below published by Radio Free Europe / Radio Liberty, explains why this name was chosen and its historical significance.

When Russian President Vladimir Putin submitted a bill aimed to help de-dollarize the post-Soviet space, it came as no surprise for many in the former U.S.S.R.

On August 28, Putin asked parliament to ratify a treaty among members of the Commonwealth of Independent States that would expand the use of their national currencies -- instead of the dollar or euro -- in foreign trade payments and financial services.

The move came as the ruble and other currencies across the region continue to suffer. It followed months of calls in Russia for the creation of a single currency for the Eurasian Economic Union, which comprises Russia, Armenia, Belarus, Kazakhstan, and Kyrgyzstan.

The proposed name: the "altyn."

For many, altyn sounds less Russian than Turkic -- an impression that is completely accurate and raises many questions.

The word, although not Slavic, is inseparable from the history of Russian statehood, as are many other Turkic-origin words related to the Russian government and financial system.

Starting in the 15th century, the altyn was a major currency in what we today call Russia.

Many relate its name to the Turkic word "altyn" -- gold.

But there is another explanation. If we look at the exchange rate of the altyn against another former Russian monetary unit, the denga (also Turkic: tanga or tenge), we will see that one altyn was equal to six half-dengas. Six in Turkic is "alty" -- and here lies the root of the currency's name.

The Golden Horde, of which many Russian principalities and territories were part -- and of which Muscovite Russia was certainly a successor -- had half-denga coins.

Denga, like altyn, is of Turkic origin. The Russian word "dengi" -- money -- is derived from denga.

The altyn and the denga circulated in Russia for centuries, until the end of the 18th century. Later, the name altyn went completely out of usage after the image of St. George on a horse with a spear started being engraved on the back of the coin. Spear is "kop'ye" in Russian, and the word "altyn" was gradually replaced by a derivative of kop'ye -- "kopeyka" or kopeck.

The half-kopeck coin survived the Russian Revolution and was in use in the Soviet Union until 1928.

Another trace of the altyn, the three-kopeck coin, continued to circulate until the Soviet breakup of 1991.

Echoes of the altyn also rang out in the Russian word "pyatialtynnik" or "pyatialtynny" -- meaning "five altyns" and used as a synonym for a 15-kopeck coin.

As for denga, it is the root not only of the Russian "dengi" but also the national currency in Turkic-speaking Kazakhstan -- the tenge. Over in Turkmenistan, another Turkic-speaking Central Asian nation, the tenge is the smallest monetary unit, with 100 tenges making one manat.

The smallest monetary unit in Kazakhstan is called the "tyin" -- a Turkic word that was used by tens of millions of Soviet citizens for the Russian kopeck.

In the Russian language, it was preserved in "poltinnik" (half-a-tyin), which was used originally for 50 kopecks (half a ruble), but in the modern Russian language is used to replace the word "fifty" -- as in 50 rubles, or even $50.

While history is often rewritten to serve political aims or conform to current societal preferences, languages still carry historic "proofs."
The Russian history strongly connected with the history of the Turkic-speaking Volga area, and many regions of the North Caucasus and Central Asia, is a part of the common history of the former subjects of the Golden Horde.

After all, such important Russian words related to statehood as "kazna" (state treasury), "kaznachei" (accountant), "tamozhnya" (customs) -- from "tamga" (mark or stamp) -- are remnants of the state system of the empire called the Golden Horde.

We shall see whether the altyn will return to the former Soviet space. Or should we say the post-Golden Horde space?