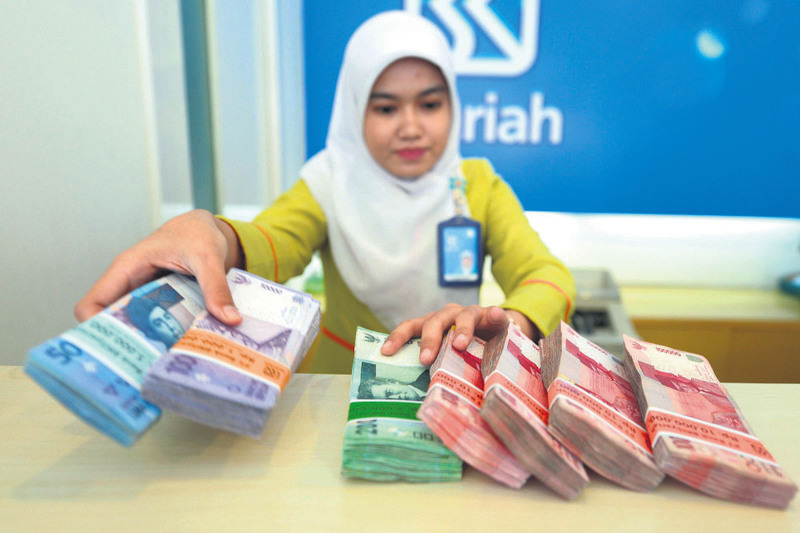 by French Press Agency - AFP Sep 28, 2015 12:00 am
Indonesian teacher Nina Ramadhaniah hopes for "blessings from Allah" by opening a sharia bank account - the sort of pious customer the world's most-populous Muslim-majority country is praying for as it launches an Islamic finance drive.

Indonesia, Southeast Asia's biggest economy, has a Muslim population of around 225 million but this huge number of faithful has not translated into success for sharia banks, institutions required to do business in line with Islamic principles.

Now regulators have launched a plan aimed at growing the sector, which currently accounts for less than five percent of banking assets, compared to a quarter in neighbouring, more developed Muslim-majority Malaysia and around half in Saudi Arabia.

Authorities believe it is a good moment, with many Indonesians getting wealthier after years of strong economic growth and an increasing trend towards piety across broad sections of society.

Many of those without bank accounts, estimated at about 40 percent of the population, are soon expected to open one.

The OJK is spearheading the drive, and unveiled a five-year roadmap earlier this year that included plans to educate the public about sharia lenders and the establishment of an Islamic finance committee to better manage the sector.

Key features of sharia banking include the prohibition of interest on loans or customer deposits, and a ban on investing in "non-Islamic" businesses, such as those involving pork or alcohol.

For teacher Ramadhaniah, who has an account with Indonesia's biggest Islamic lender, Bank Syariah Mandiri, the ban on interest is a key attraction.

"Charging interest is haram (against Islam), ill-gotten gains that will not bring me any blessings from Allah," the 44-year-old told AFP. "I don't want to live in sin."

Sharia accounts often work on a "profit-and-loss sharing" model, meaning customers get a windfall when the bank does well but can lose out when it does badly.

There are obvious disadvantages. Sharia lenders generally offer lower returns on investments and their modest size often means they provide fewer services than larger, conventional peers - many shops are not equipped to accept their debit cards.

Nevertheless, Islamic banks have proven popular in recent years, with the sector expanding on average more than 40 percent a year between 2008 and 2012, according to the OJK. The growth came after laws were changed to make it easier to establish an Islamic bank, and there are now a plethora of standalone sharia lenders, Islamic banking units attached to conventional banks, and smaller Islamic financial institutions in the countryside. Growth in the sector has lost steam due to a broader slowdown in the economy, which is expanding at six-year lows - giving authorities another reason to launch their drive.

Central to the overhaul is a plan to set up a National Islamic Finance Committee this year, to oversee the sector by bringing together representatives from different government agencies and act as a contact point for potential foreign investors.

Currently responsibility for the sector is spread around different bodies, such as the OJK, the central bank and the finance ministry, according to the OJK's Ilyas.

It is modelled after similar bodies in other countries, such as the International Islamic Financial Centre in Malaysia, where the sector is already far more developed as the government started supporting it some years ago. In addition to the OJK roadmap, the government has announced plans to merge the Islamic banking subsidiaries of four state-owned banks to create an Islamic mega-bank, which should be able to provide better services than the current Islamic lenders.

While observers have broadly welcomed the plans, they concede that many difficulties remain.

Khalid Howladar, Moody's global head of Islamic finance, said it would be "quite a challenge" to grow the sector to a substantial level. "The market is growing faster than conventional but from a very low base," he said, adding Islamic banks in Indonesia did not offer "substantive competition" to their non-sharia peers.

But for Ramadhaniah and a growing army of devout Indonesians with new-found spending power, Islamic banks remain the only choice. "I really don't care that I'm not earning anything or getting lower returns on my investments," she said. "I can live in peace."
RELATED TOPICS