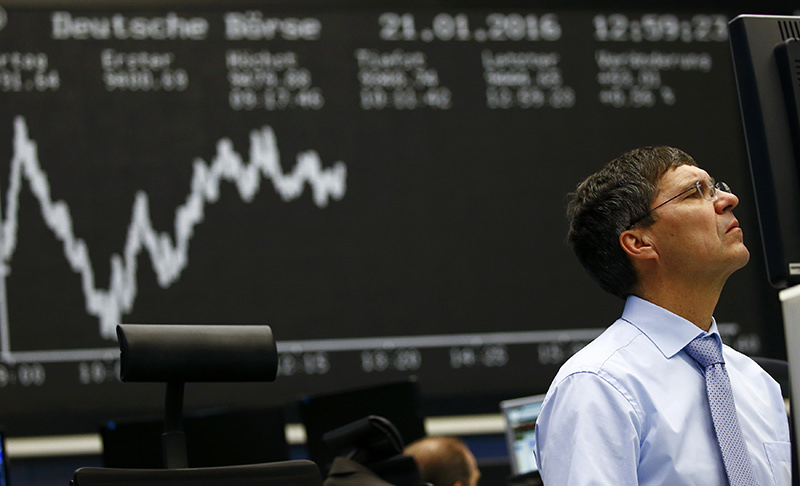 A trader works at his desk in front of the German share price index, DAX board, at the stock exchange in Frankfurt, Germany, January 21, 2016. (REUTERS Photo)
by reuters Jan 25, 2016 12:00 am
A renewed drop in oil prices due to worries about a global supply glut on Monday hurt U.S. and European stock markets and weighed on the dollar following a rebound in those sectors late last week.

Crude oil prices fell 4 percent as Iraq announced record-high oil production feeding into a heavily oversupplied market, wiping out much of the gains made in one of the biggest-ever daily rallies last Friday. [O/R]

"The news that Iraq has probably hit another record builds on the oversupply sentiment," said Hans van Cleef, senior energy economist at ABN Amro in Amsterdam.

The oil-led market turbulence since the start of 2016 has raised hopes of more aid from major central banks.

Traders have bet the Federal Reserve would seek to soothe financial markets after its two-day meeting on U.S. monetary policy that will begin on Tuesday. [FED/DIARY]

Global markets slumped at the start of the year on fears that a slowdown in China would spread to the rest of the world economy, and oil prices sank to 13-year lows.

Losses in oil and Wall Street pushed the greenback lower. The dollar index .DXY, which tracks the greenback versus a basket of six currencies, slipped 0.1 percent, to 99.445. [FRX/]

U.S. 10-year Treasury yields were down 3 basis points at 2.02 percent US10YT=TWEB, as the fall in oil prices underpinned support for safe-haven debt. [US/]