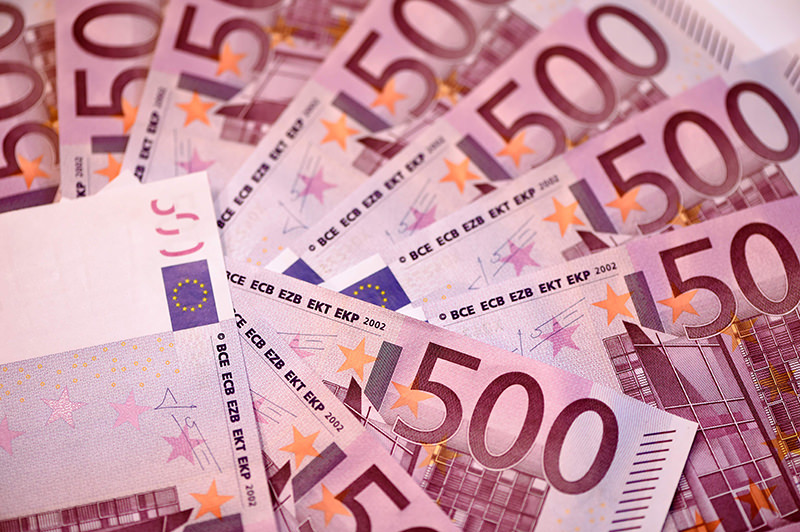 This illustration picture taken on February 12, 2016 in Paris shows several 500 Euro notes displayed in an arrangement. (AFP Photo)
by Feb 12, 2016 12:00 am
The European Central Bank will take a decision soon on whether to keep printing 500-euro banknotes, with the arguments for doing so becoming "less and less convincing", a top-ranking official said Thursday.

"We're actively considering the question and will take a decision shortly," executive board member Benoit Coeure told the French daily Le Parisien in an interview, when asked about the future of the euro area's largest denomination banknote.

Authorities increasingly suspect that the notes are being used for illicit purposes, "an argument we cannot ignore given the importance of fighting money laundering and the financing of terrorism," Coeure said.

The EU Commission said earlier this month that it planned to consult with the ECB and other parties concerned to decide whether action needed to be taken regarding the 500-euro note.

"From my point of view, the arguments in favour of keeping it are less and less convincing," Coeure said, but acknowledged that some people, "notably in Germany" were concerned about the disappearance of payments in cash.

Any decision regarding their possible withdrawal would be taken by the ECB's governing council, the 25-member board comprising six executive board members and the 19 central bank governors of the member states.

But a number of experts have suggested that doing away with the 500-euro note would not be particularly effective in fighting crime.

"Organised crime isn't stupid. Most money is laundered without cash via bogus companies," said Friedrich Schneider, an expert on the shadow economy at the University of Linz in Austria in interviews to a number of German media recently.

Another possible beneficial effect would be that it would become more inconvenient to hoard cash, another encouragement to spend and help push up the chronically low level of inflation, commentators argued.

But Coeure rejected such arguments.

"This decision has nothing to do with monetary policy," he told Le Parisien.

Resistance to the plans appears to be particularly high in Germany, where most people still prefer to make payments in cash. And when the euro was created, it was Germany that had been keen to have a 500-euro bill because it was of a similar size denomination as its 1,000-deutschemark banknote.
Last Update: Feb 12, 2016 7:17 pm
RELATED TOPICS