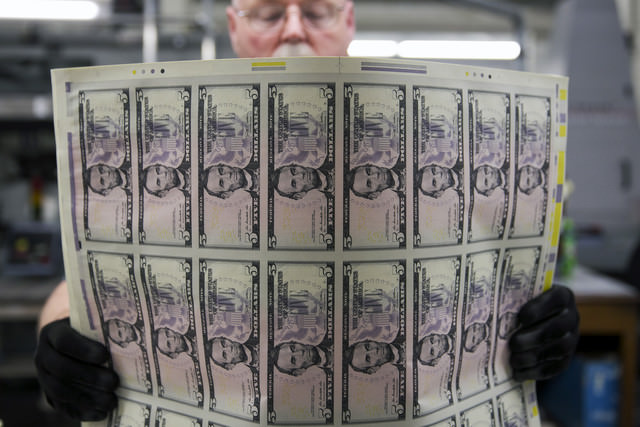 by Mar 24, 2016 12:00 am
The dollar was on its best run in almost a year on Thursday, pressuring commodities and shares after yet another Federal Reserve official talked up the chance of more than one hike in U.S interest rates this year.

If the dollar can keep its footing going into the long Easter weekend it will notch up a near 2 percent, and first weekly gain in a month against the world's other major currencies.

The hot streak extended after St. Louis Fed President James Bullard joined a chorus of officials in highlighting the chance of at least two rate hikes this year, with the first perhaps as soon as April.

Markets imply only one increase and dealers suspect an orchestrated attempt by the Fed to shift that thinking.

Equity investors tend to dislike any hint of tighter U.S. policy and European shares were down over 1 percent, their biggest tumble in over a week, as they faced a fourth straight session in the red.

Oil slipped back under $40 a barrel, while Asia had dropped overnight too as the relapse in commodity prices and sharp move in China's yuan took their toll.

"I think it could be a slow adjustment downwards (in risk assets) for a month or two months but its hard to guess," he added. "The dollar is rising and macro demand and stronger demand in commodities is not really there."

The euro eased to $1.1164, leaving it well off last week's top of $1.1342. Sterling also slid to $1.4064 on concerns this week's attacks in Brussels could aid the campaign to leave the European Union in June's "Brexit" vote.

Yet for all the Fed's chatter about multiple hikes, the market seemed far from convinced and more focused on the dollar.

It was also notable that Treasury yields actually fell in response, with the 10-year back down at 1.87 percent in European trading from a high of 1.95 percent on Wednesday.

European yields dropped too, with benchmark German, other euro zone and U.K. Gilts in demand as the rise in the dollar and the drop in commodities from oil to gold to copper knocked inflation expectations again.

Oil had buckled after data on Wednesday showed crude stockpiles had risen by three times the amount expected in the latest week.

Russia said on Thursday its crude exports were expected to rise sharply in the coming months and Gazprom Neft, the oil subsidiary of state giant Gazprom, said its production would rise at least 5 percent this year.

"Oil is still the centre of attention for many markets. As their prices fall, markets are turning risk-off. We also should expect some correction given the fast pace of recovery in various asset markets," said Tohru Nishihama, senior economist at Dai-ichi Life Research Institute in Tokyo.

Japan's Nikkei lost 0.6 percent meanwhile. Trading house Mitsui & Co dived 7.5 percent after suffering its first ever loss as it was hit by big writedown on its copper and gas investments.