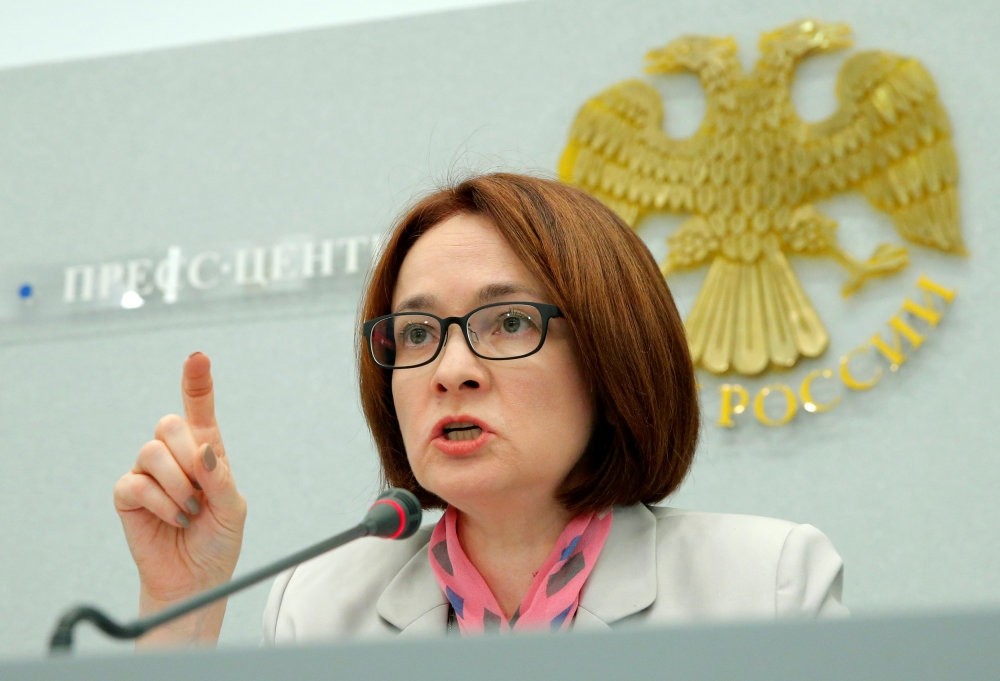 Russia's Central Bank Governor Elvira Nabiullina speaks during a news conference in Moscow on Friday. (Reuters Photo)
by Jun 11, 2016 12:00 am

Russia's central bank cut its main lending rate on Friday for the first time in almost a year, signalling confidence that inflation risks are declining and describing an economic recovery as "imminent". The rate cut comes at a time when Russia's economy, plagued in the past few years by plunging oil prices and Western sanctions over the Ukraine crisis, is now showing signs that the worst is behind it.

The bank cut the rate by a half-point to 10.5 percent, the first cut since July 2015, an outcome predicted by a majority of analysts although some had expected no change. After declining by 3.7 percent last year, the economy now looks set to begin growing again, helped by an unexpectedly strong rebound in global oil prices and a plunge in inflation that is helping to support living standards.

Explaining its decision, the bank said that it "notes the positive trends of more stable inflation, decreased inflation expectations and inflation risks against the backdrop of imminent growth recovery in the economy".

The bank also said that it "will consider the possibility of a further cut based on estimates for inflation risks and alignment of inflation decline with the forecast trajectory". The rouble strengthened after the decision, an unusual response as lower interest rates normally make a currency less attractive to hold. But this factor appeared to be outweighed by the positive signals the central bank sent about the health of Russia's economy more generally.

"The market has interpreted the decision of the central bank positively," said Sergey Romanchuk, head of forex and money markets at Metallinvestbank. "The central bank is conservative and if even it has decided to lower rates in the current situation, it means its evaluation of the prospects for economic growth and lower inflation are quite reliable."

The rate cut and unusually bullish rhetoric from the central bank testify to the improvement in Russia's economic prospects over recent months as commodity prices rally and geopolitical tensions ease.

Brent crude, an international benchmark for Russia's main export, has recently hit eight-month highs above $50 per barrel, recovering more quickly than expected from a 13-year low of $27 per barrel in January. Although Russia remains under Western sanctions, with little expectation they will be lifted in the coming months, there are also indications geopolitical tensions are diminishing. Italian Prime Minister Matteo Renzi and EU Commission head Jean-Claude Juncker will visit an economic summit in St Petersburg next week in a tentative sign European leaders may be keen to rebuild bridges to Russia.

In its statement, the central bank drew attention not only to declining inflation but also to favourable economic growth trends. It predicted that quarterly gross domestic product would begin rising in the second half of 2016, with GDP expected to grow by 1.3 percent in 2017. "Positive trends in the economy are not accompanied by a higher inflationary pressure," the bank said, adding that recent macroeconomic indicators "confirm greater sustainability of the Russian economy to oil price fluctuations".

There had been growing expectations the bank would cut rates as inflation has fallen sharply over the last year and remained stable at 7.3 percent for the last three months, a better-than-expected outcome that suggests the bank is on track to meet its target of 4 percent inflation by the end of 2017.

Inflationary pressure has eased in part thanks to a rebound in the rouble, helped by the recovery in global oil prices. However, the central bank cautioned that although they had declined, risks it would fail to meet its inflation target remained "at a heightened level". It expressed concerns about the lack of a mid-term budget consolidation strategy as well as uncertainty about wage and pension indexation, and the risk of further volatility on global commodity markets.

"The materialisation of these risks might cause a slowdown in the inflation reduction," the central bank said, adding that a further rate cut would hinge on whether inflation continued to fall.