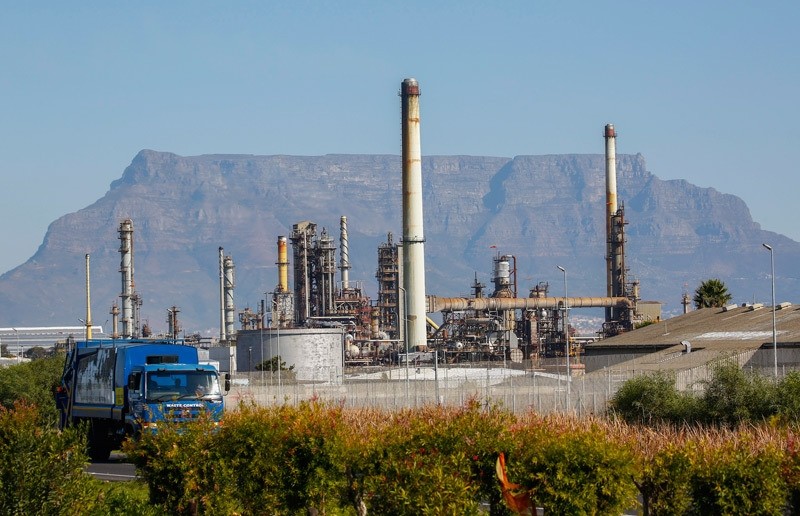 A vehicle passes the Chevron Oil Refinery in Cape Town, South Africa (EPA Photo)
by Jun 13, 2016 12:00 am
U.S. stocks were little changed on Monday as a recovery in oil prices limited earlier losses, a day before the Federal Reserve commences its policy meeting.

Seven of the 10 major S&P sectors were higher with the energy index's 0.85 percent gain leading the advancers.

However, Microsoft's 2.6 percent fall weighed on the three major indexes after the software company agreed to buy LinkedIn for $26.2 billion. LinkedIn jumped 47 percent to $193.13.

"Today seems to be a very volatile day.... The market is always looking for any message the Fed may have in terms of what they do in July or what the statement may be for the meeting," said Omar Aguilar, chief investment officer at Charles Schwab Investment Management.

The U.S. Federal Reserve Open Market Committee (FOMC) will meet on Tuesday and Wednesday to decide when to raise interest rates for the second time in nearly a decade.

Fed Chair Janet Yellen, who had been dropping hints of a rate hike most of last month, was more vague last week on its timing after dismal May hiring data and a possible Brexit raised concerns about the strength of the economy.

Traders have reduced the odds of a hike this month to 1 percent and the one in July to 33 percent, according to CME Group's FedWatch tool.

The Brexit vote provides a lot of volatility, especially in the currency markets, and will continue to do so for the next two weeks, Aguilar said.

Britain will vote on June 23 to determine if it would remain in the European Union.

Safe-haven assets soared on the uncertainty.

Gold prices hit their highest since mid-May and the yen surged to a three-year high.

An attack in Orlando, Florida, where a gunman killed over 50 people at a nightclub added to the dour mood. Shares of gun makers Smith & Wesson and Sturm Ruger rose about 9 percent.

Facebook was down 1.4 percent at $114.99 after CNBC said Citron Research was short on the stock.