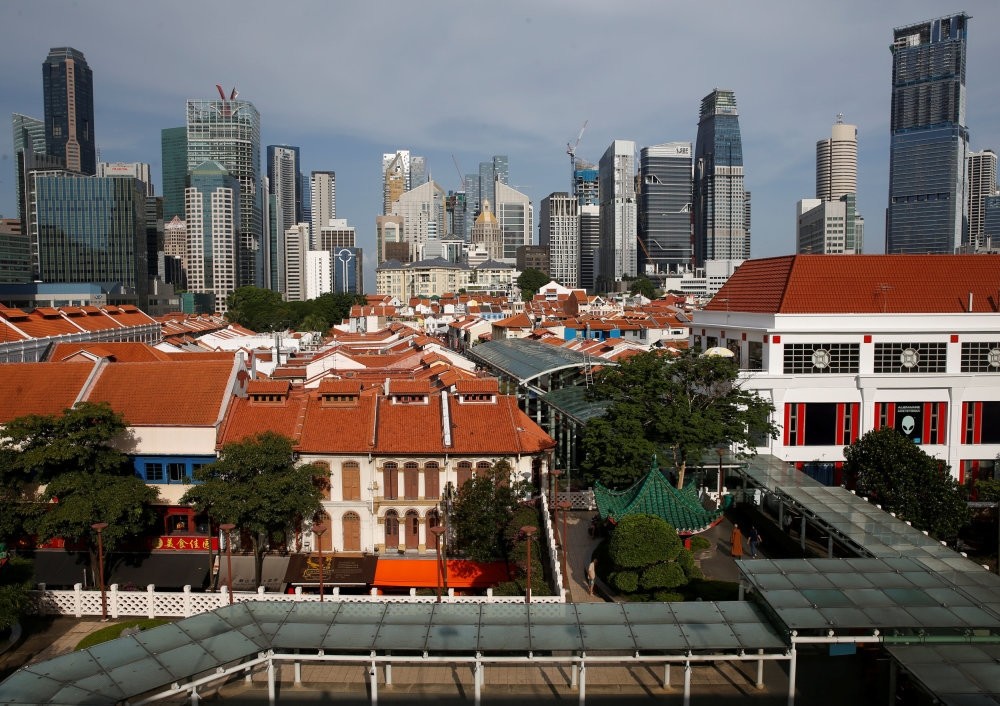 A general view of the skyline of the central business district in Singapore.
by reuters
Jul 05, 2016 12:00 am

Singapore is rushing to reinvent itself as Asia's financial technology, or fintech, hub to fend off a regulatory threat to its wealth management industry and revive a sluggish economy. State funding, light-touch regulation and a recent move to allow start-ups to test financial products in a controlled environment have put Singapore ahead of rival Hong Kong to be Asia's fintech hotspot. Much like Uber, Airbnb and others have harnessed technology and online social networking to disrupt taxi and hotel services, fintech firms are shaking up the traditional banking and financial services industry. Singapore's fintech drive comes as its role as an offshore private banking centre is under threat from a multi-billion-dollar money laundering scandal in neighbouring Malaysia, and as Indonesia chases undeclared money parked in the low-tax city state. Also, Singapore's traditional shipping and manufacturing growth drivers are faltering amid a global economic slowdown and a slump in commodity prices and demand.

Singapore is attracting interest, too, from among the 60,000 or so fintech firms based in London's near-$9 billion market - a trend likely to accelerate with Britain's referendum vote to leave the European Union.

"We already have registered interest from UK-based companies to move to Asia as it's getting very crowded there," said Markus Gnirck, partner and co-founder of tryb, a fintech consultancy. "Brexit will probably accelerate a few of these conversations."

Britain's soft approach to regulation and its influence on Europe would likely wane with Brexit and any new barriers that would create.

"In the long term (this) makes Europe much less attractive as a place for entrepreneurs," Taveet Hintikus, CEO of peer-to-peer money transfer firm TransferWise, told the World Economic Forum in the Chinese city of Tianjin this week. He told a panel session that his company was looking at Asia for expansion, and Singapore appeared a more vibrant fintech centre than Hong Kong.

A KPMG report said Singapore has been more aggressive in pursuing fintech opportunities, and tryb noted that all but a dozen of the around 210 fintech firms operating in Singapore have opened in the past two years - the fastest growth rate in Asia.

However, Singapore's immigration laws are an obstacle, start-ups and consultants say, as measures to curb the number of foreign workers and give priority to Singaporeans have left a shortage of talent. And Singapore's banking regulations have created a risk averse culture that is at odds with the trial-and-error approach of fintech start-ups. But the city state's efforts are bearing fruit. SmartKarma, a start-up that operates a platform offering Asian institutional research and analysis on demand, chose Singapore over Hong Kong for its headquarters.

"There's no other city in the world where you have such a progressive government when it comes to supporting innovation today - be it from grants, to having funding vehicles to operational support," said co-founder and CEO Raghav Kapoor.

Singapore state agency SPRING is an investor in SmartKarma, and government agency International Enterprise is helping the firm expand overseas. With Moody's expecting Singapore's economy to grow at its slowest pace since the global financial crisis, government officials are keen to engage with new industries: one fintech entrepreneur in shorts and flip-flops says he keeps in touch by WhatsApp with regulators and meets them once a week.

In Hong Kong, despite nearly $300 million in fintech funding, start-ups face tough regulatory hurdles say lawyers, consultants and fintech executives. There are fewer than 100 fintech firms in Hong Kong, according to tryb. Hong Kong's rules and regulations make it difficult to set up crowdfunding platforms, payment firms and peer-to-peer lending operations, and to secure operating licenses.

For example, Chinese peer-to-peer lender Jimubox spent nearly a year setting up in Hong Kong only to abandon the plan because strict rules on account openings made it hard for the firm to take on customers.

"I spent time and money and hired a couple of people to explore this and ended up having to kill it because it didn't make sense from a commercial standpoint, purely around the account opening process," said Jimubox co-founder Barry Freeman.

In Singapore, any entity can operate payment systems and e-wallets without seeking approval, while rules introduced in Hong Kong last year require firms to have a licence for Stored Value Facilities, or a prepaid electronic cash or card. Monetary Authority of Singapore (MAS) managing director Ravi Menon said fintech firms would only be regulated when they grow large enough to pose a risk to the traditional financial system.

A spokeswoman for Hong Kong's Financial Services and the Treasury Bureau, the agency overseeing fintech policy development, said the government "is committed to facilitating the development of fintech in Hong Kong, whilst upholding the 'technology neutrality' principle and ensuring appropriate consumer protection." "We are absolutely not moving fast enough" on fintech, said Laura Cha, chairman of Hong Kong's Financial Services Development Council (FSDC). "This is an area of development that is a very key element of the financial industry that we cannot ignore."