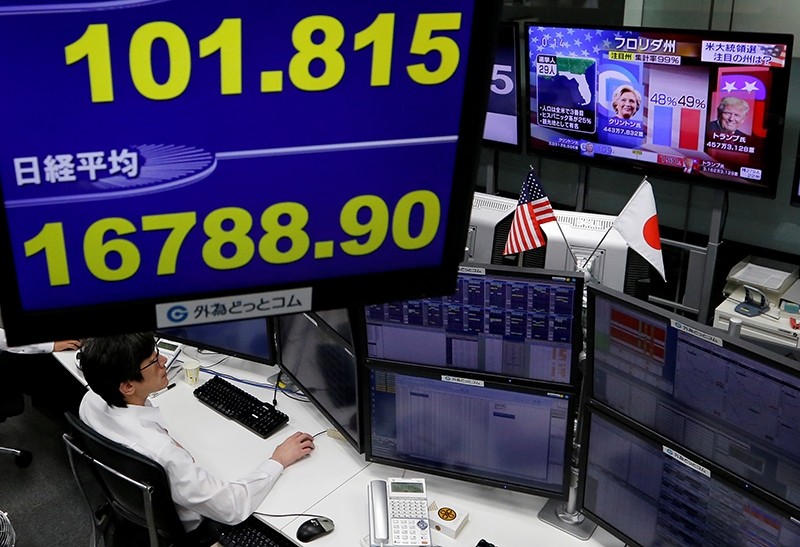 |Reuters Photo
by French Press Agency - AFP Nov 09, 2016 12:00 am
Tokyo stocks nosedived Wednesday as polling numbers suggested that market-favoured Hillary Clinton is struggling in her bitter battle against Donald Trump for the US presidency.

The benchmark Nikkei 225 index plummeted 6 percent to 16,153.40 in afternoon trading, after swinging between gains and losses for most of the morning as election results trickled in.

The latest numbers showed the rivals seemingly locked in a dead heat, after markets had largely been betting on Clinton, who is widely seen by investors as a safer pair of hands.

"The markets had bet on Clinton too much and that is coming off now," said Daisuke Uno, a chief market strategist at Sumitomo Mitsui Banking, adding that "share prices could plunge even more".

A deeply divided electorate of about 200 million Americans were asked to make a momentous choice between electing the nation's first woman president, or handing the reins of power to a billionaire populist who has upended US politics with his improbable outsider campaign.

Clinton -- the Democratic former first lady, senator and secretary of state -- began the day as the narrow favourite to win the White House and become America's first female president.

But as polls closed in all but the westernmost states, and media called state races one-by-one, giving the key battleground state Ohio to her Republican rival, pollsters were scrambling to update their forecasts and pointing to either a dead heat or an upset.

The shock results sparked buying of the yen, which is seen as a safe investment in times of uncertainty. But a stronger yen is bad for Japanese exporters' profitability and tends to spark selling of their shares.

"Back in June the markets had all but priced in a UK vote to remain in the EU, this time it was a similarly favourable market outcome that traders were banking on -- a Clinton victory -- and it seems that once again, they may have got it wildly wrong," Craig Erlam, senior market analyst at forex firm OANDA, said in a commentary.

"The odds of Clinton securing the White House have been slashed in the last few hours and some even show Trump as now being the favourite."

The Mexican peso, which has become a proxy for the property mogul's chances of taking the White House slumped to below 20 against the dollar, an historic low.