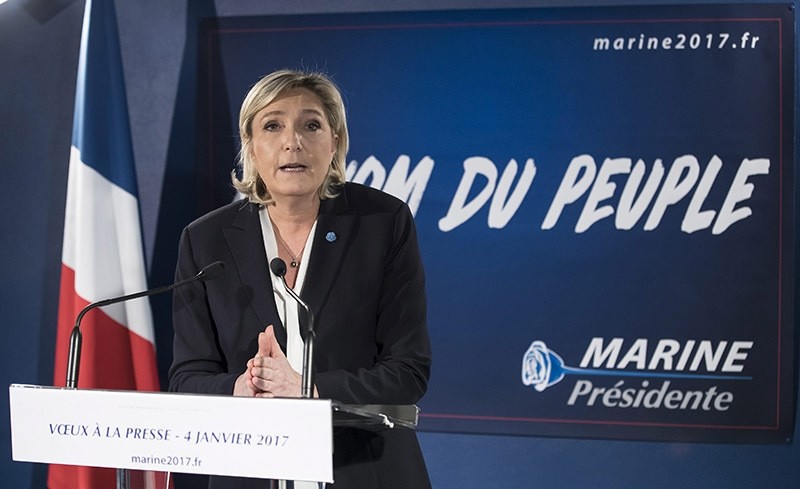 Leader of France's far-right party Front National (FN) Marine Le Pen, delivers a statement on her new year wishes to the press at her campaign headquarters in Paris, France, 04 January 2017. (EPA Photo)
by reuters
Jan 04, 2017 12:00 am

Euro zone countries should retreat from the euro single currency and return to a "common currency" structure, French National Front leader Marine Le Pen said on Wednesday, evoking the era of the ECU basket of currencies.

Speaking to Reuters after a New Year news conference, Le Pen, who hopes to become president of France next year, also said that French national debt would be denominated in a new national currency under her administration.

Le Pen has long said that France should exit the euro currency, but in the past has offered little detail about how that could happen.

"A 'monetary snake' is something that appears reasonable," she said - a reference to the 'snake in the tunnel' system introduced in the 1970s to limit fluctuations between European currencies.

The ECU was a basket of European currencies used as a unit of account by members of the bloc in the two decades leading up to the introduction of the single currency in 1999.

It existed in parallel with the European Exchange Rate Mechanism (ERM) which attempted to narrow fluctuations between the currencies of member states.

Le Pen's deputy Florian Philippot said this monetary cooperation with other European countries did not represent a change in the leader's view that France should regain monetary sovereignty.

"A currency following the ECU model is not a currency you have in your wallet or your bank account, it's an accounting currency between countries," he said.

"It could be a model, maybe even a transitory one," he added.

Another top official, Nicolas Bay, said that after simply stating that the euro did not work currently, the far-right party was now in a "second phase" of explaining how to make the system work.

National Front economist Jean-Richard Sulzer said the new system the party advocates would have fixed exchange rates but allow "rare" adjustments. "Rates should be fixed but adjustable," he said.

"The exchange rate would not float every morning like before the ECU because it created huge instability for our exporters."