Russia pushes to rid itself of 'Potemkin' banks by 2019 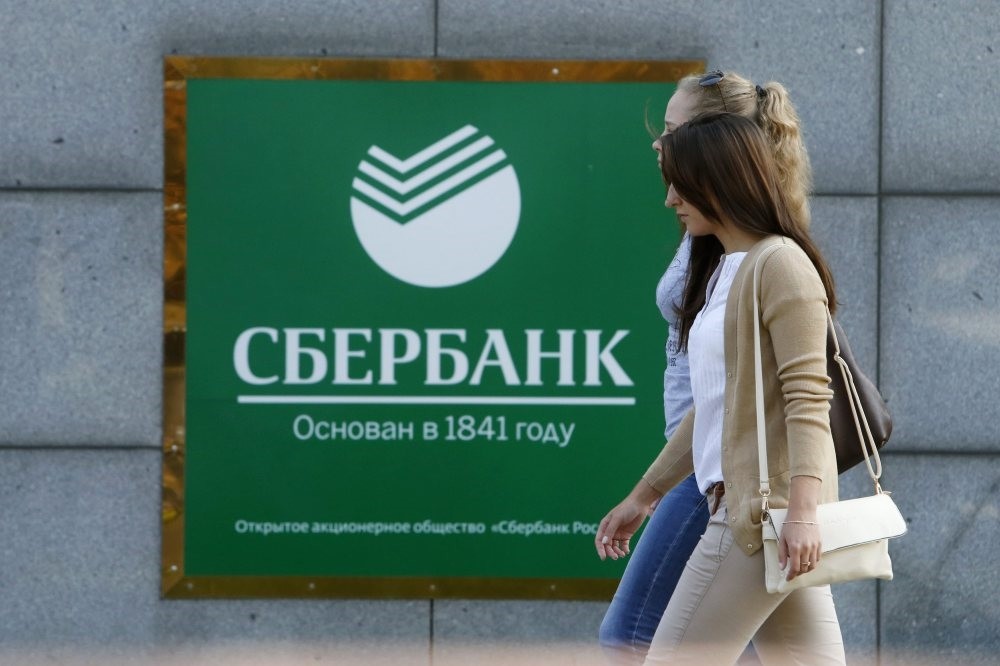 Women walk past an office of Sberbank in Moscow.
by Mar 07, 2017 12:00 am
Russia plans to extend a review of bank licenses for another two years, shutting down scores more banks after closing hundreds in the past four years, mostly for committing fraud or other crimes, a central bank deputy governor said in an interview. Vasily Pozdyshev, a deputy governor at Russia's central bank, says despite the large number of lenders closed so far,his team is still finding more propping up criminal activity and would need until 2019 to finish a crackdown. The review by the central bank over the past several years has already reduced the number of banks in Russia to around 570 from 900. At that pace, Russia would end up with around 400 banks in 2019, although the central bank says it has no numerical target.

The closure of so many banks has helped strengthen Russia's few large lenders, such as Sberbank and VTB, which have gained clients from banks whose licenses have been withdrawn. Sberbank now holds more than a third of Russia's banking deposits. Pozdyshev said many of the banks already shut or now in the crosshairs of the regulator were guilty of giving out loans to fake companies or stealing depositors' money. Others support a shadow economy for goods and services bought and sold outside ofofficial, taxable channels.

"Our work to clean up the banking system is sometimes much more like the work of a financial investigator, an investigator of financial crimes, than the work of a modern banking regulator, which checks whether a bank is sufficiently capitalised or not," Pozdyshev told Reuters.

"We are up against a whole business of creating fictitious borrowers. ... This is a whole virtual world managed by IT programs and servers which very often aren't located in the bank."

Many banks are "Potemkin enterprises," Pozdyshev said, a reference to fake villages which nobleman Grigory Potemkin put up in the 18th century to impress Empress Catherine the Great.

Russian central bank Governor Elvira Nabiullina gave new impetus to the purge of banking licenses in 2013 after being appointed by President Vladimir Putin. A previous attempt to clean up the banking system was slowed from 2006 after Andrei Kozlov, a central banker leading the campaign against money laundering and corruption, was shot dead in Moscow. The central bank is heavily guarded and staff including Pozdyshev travel with protection.

In its latest operation to shut down banks, the central bank revoked the licenses of three lenders in Russia's Tatarstan region, including top-50 bank Tatfondbank, on Friday. It did not accuse any of those three of any crimes, but said it took the action because of their poor asset quality and high risk. All three banks posted notices from the central bank on their websites on Friday saying they had ceased operations because their licenses had been withdrawn.

Russian authorities rarely succeed in bringing to justice those responsible for banking fraud or bankruptcies, Pozdyshev said. Russia needs mechanisms to stop unscrupulous bankers from fleeing the country, he added.

"Banks often have influential backers, and this makes everything much more difficult. But we have launched this policy and we need to carry it to its conclusion. If we stop, then the banking system will immediately slip back, into the shadows."

The central bank had to plug a hole of around 600 billion roubles ($10 billion) in the balance sheets of the roughly 100 banks whose licenses it withdrew last year. Among the common criminal schemes the central bank uncovered were: lending to companies with no real business, fictitious loans to individuals and fraud involving tradable securities. The central bank employs around 2,000 people in its supervisory department and conducts around 400 checks into banks a year, Pozdyshev said. They sometimes check whether a bank's clients are genuine businesses.

He gave examples of banks that had licenses stripped after alarge number of clients made small tax payments on the same day, or paid back loans at the same cash machine in the same hour, which led the regulator to conclude the clients were fakebusinesses. Sporadic protests over some bank closures have been contained, as the central bank-funded Deposit Insurance Agency covers the losses of individuals and small businessmen for up to 1.4 million roubles.