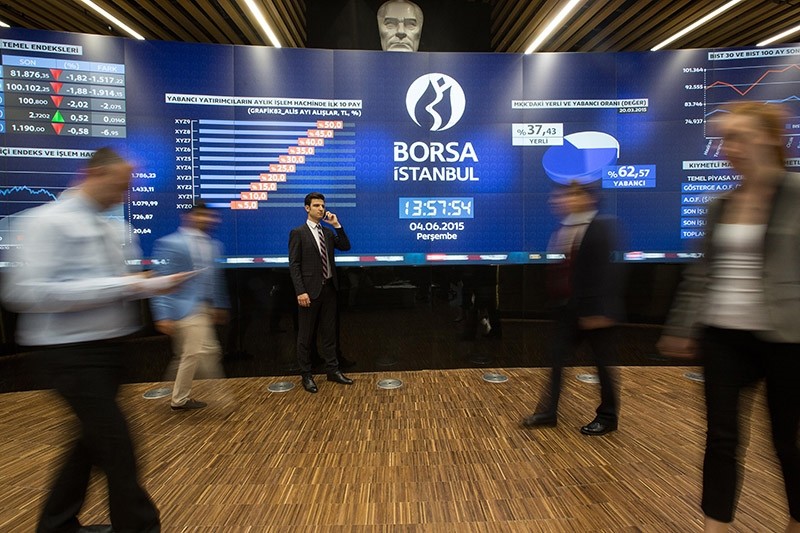 The BIST 100 index has reached the psychological resistance level of 100,000 points, which has been continuously voiced by analysts in the upper trend that began last December. The BIST 100 stock index opened Tuesday up 300.03 points at 99,742.14 points, a 0.3 percent rise on Monday's close.

The index has so far continued its gradual rise, starting with the lowest rate of 71,792.96 points on Dec. 2, 2016. The index, which has reached 100,000 points for the first time in its history as of today, has gained 28 percent since the beginning of the year.

Examining the Borsa Istanbul's performance together with news headlines in this period, the fact that the markets continue to benefit from "abundant money" despite the continuation of uncertainties abroad, the domestic political stability after the referendum and the central bank and the economy administration's support for economic activity are among the leading factors in the share markets.

The BIST 100 index, which rose 10.44 percent despite the intense news flow in January, external uncertainties and Turkey's loss of its investable credit rating, gained 1.37 percent in February and 1.68 percent in March. The index, which made a premium of 6.42 percent by accelerating its rise in April, increased 3.05 percent in May. The index started June with a gain and climbed 2.4 percent compared to the May closing as of yesterday's close.

The banking and the holding sectors rose 0.37 and 0.47 percent ,respectively, while the best performing sector was leasing and factoring, which rose 0.95 percent. The food and beverage index started the day with the biggest drop, down 0.25 percent.

January best in 34 months despite Fitch

Given news headlines, especially since the beginning of the year, the extension of the state of emergency for another three more months in January, the terrorist attack in Izmir and the start of negotiations on constitutional amendments in Parliament, the fact that international credit rating agency Fitch Ratings downgraded Turkey's credit rating to BB+, which is below the investable level, has been the most negative headline on the market.

After the record-breaking course of dollar-TL parity as well as an intense news flow and agenda, the Central Bank of Republic of Turkey (CBRT) has tightened its monetary policy stance since January. The CBRT, which has not opened a one-week maturity repo auction since Jan. 12, increased the interest rate corridor's upper band from 8.5 percent to 9.25 percent and the late liquidity window (LLW) interest rate from 10 percent to 11 percent at the January meeting. The CBRT also started foreign exchange deposit auctions in exchange for TL deposits in January.

The BIST 100 index achieved the best monthly increase after March 2014 with an increase of 10.44 percent in January despite the afore-mentioned developments.

The central bank has supported both the Turkish lira and the markets by strongly maintaining its tight monetary policy stance after January. Having raised the LLW interest rate to 12.25 percent with an increase of 75 basis points at the March meeting and 50 basis points in April, the CBRT has increased the average funding cost up to 12 percent by not opening a one-week repo auction until today. The weighted average funding cost stood at 8.28 percent on the first trading day of the year. While expectations that the government will focus on the economy tipped the scales after the constitutional referendum passed, unrest in the markets parallel to discourses on the country's political uncertainty has also ceased.