Fed hikes rates for 2nd time this year, sees one more hike in 2017 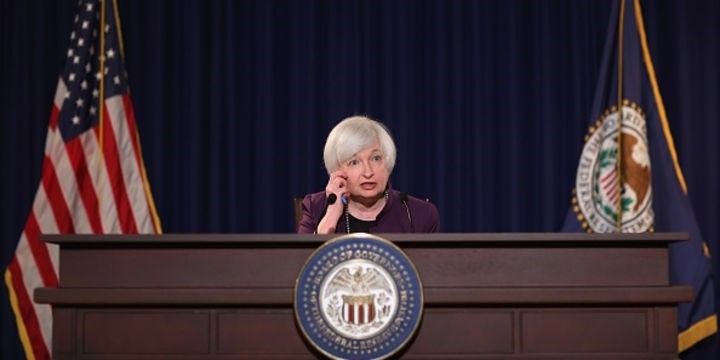 The U.S. Federal Reserve raised its benchmark interest rate for the second time this year and said it is planning to reduce the size of its $4.5 trillion balance sheet as well.

Despite the recent spate of weak economic data, the Fed signaled another increase remains likely this year.

In explaining the second rate hike of 2017, the Fed noted that "the labor market has continued to strengthen and that economic activity has been rising moderately so far this year," but acknowledged that the preferred inflation measure will remain below the two percent target for some time.

Fed officials voted 8-1 to raise the federal funds rate to a range of 1 to 1.25 percent. The rate sets what banks can charge each other for overnight loans and influences the availability and flow of money in the U.S. economy. Only Neel Kashkari, president of the Minneapolis Fed bank, opposed the increase.

The Fed also said it expects to begin reducing its balance sheet this year "provided the economy evolves broadly as anticipated." This would reduce its holdings of Treasury and mortgage-backed bonds, which they acquired in the wake of the financial crisis to support economic growth. Fed officials project growth of roughly 2 percent in 2017.

But the U.S. central bank acknowledged that the preferred inflation measure will remain below the two percent target for some time.

That would be followed by three rate increases in 2018 and three more in 2019, with the key rate at 2.9 percent by the end of that period.

Analysts in recent weeks have become increasingly doubtful the Fed will indeed go ahead with a third rate increase later this year, as inflation, consumption and other economic data have indicated the weakness seen in the first quarter has continued.

However, the statement from the Fed's policy-setting Federal Open Market Committee repeated that it still believes "with gradual adjustments in the stance of monetary policy, economic activity will expand at a moderate pace, and labor market conditions will strengthen somewhat further."

The decision came just hours after government data was released showing the Consumer Price Index fell further from the two percent target in May, and retail sales declined, pushing Fed futures markets to put the chances for another rate increase this year to below 50 percent.

Federal Reserve Chair Janet Yellen was holding a press conference to explain the decision further, and observers will look for justification of the Fed's confidence.

In their quarterly projections, Fed officials saw the economy growing slightly faster than previously forecast, with GDP up 2.2 percent this year, a tenth of a percentage point higher than in March, but unemployment and inflation now seen lower.

The estimate for the central bank's preferred measure of inflation, the PCE price index, was cut three-tenths to 1.6 percent, while the core PCE, which excludes volatile food and energy prices, was cut two-tenths to 1.7 percent, according to the Summary of Economic Projections.

In the policy statement, the FOMC said: "Inflation on a 12-month basis is expected remain somewhat below two percent in the near term but to stabilize around the committee's two percent objective over the medium term."

The Fed now sees the unemployment rate ending the year at 4.3 percent, where it sits currently, rather than the 4.5 percent previously expected.

The central bank also confirmed that it will begin later this year to implement a plan to reduce the size of its investment holdings, which were built up to record levels during the financial crisis to help support the economy, especially once interest rates reached zero.

As long as the economy "evolves broadly as expected," the plan "would gradually reduce the Federal Reserve's securities holdings."

Fed officials had previously increased the rate in March to a range of 0.75 to 1 percent. There was only one rate increase in both 2015 and 2016.

Financial markets have been anticipating the increase. U.S. stock markets were relatively flat through afternoon trading, while the yields on 10-year Treasury notes had fallen to 2.11 percent.