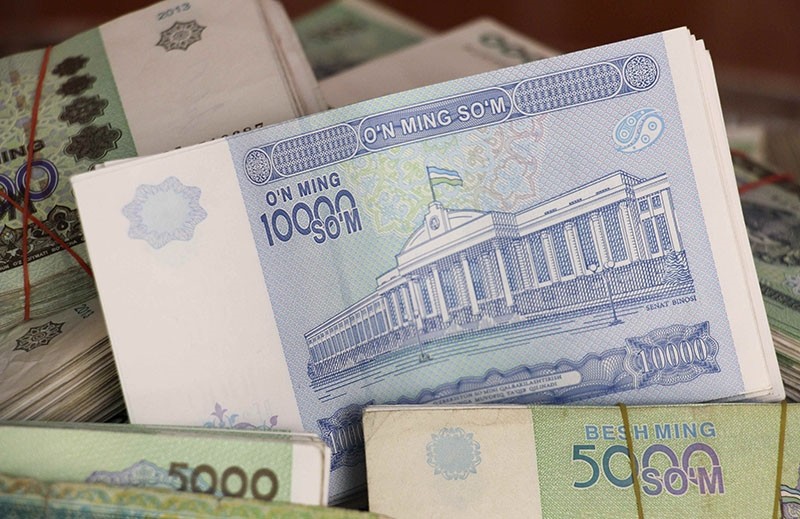 Uzbekistan's currency fell by nearly 50 percent Tuesday after the government scrapped most restrictions on foreign currency operations in an effort to tempt international investors after two decades of isolation.

President Shavkat Mirziyoyev, who came to power after Islam Karimov's death last year, has ordered the national currency's rate with the dollar to be determined by the market, although the central bank will still play a role in ensuring its stability.

Uzbekistan's central bank showed on its website on Tuesday the dollar costing 8,100 soms, close to twice its previous official value of 4,210 soms and even more than the black market rate of 7,700 soms.

In a statement late on Monday the central bank said the move was "based on the analysis of the dynamics of exchange rate factors for 2003-2017".

The move came as the Central Asian country looks set to open itself up to foreign investors after more than two decades of isolation and protectionism under Karimov.

The ex-Soviet country has long had a two-tier system for currency exchange in which black market dealers wielded major influence over the highly regulated economy.

Highly-placed government officials have long been rumored to pull the strings in the lucrative black market for foreign exchange, the future of which is now under question.

The move will be welcomed by companies working with international markets who were forced to sell their foreign reserves at the miserly government rate under the old system.

State carrier Uzbekistan Airways, which previously sold flights in dollars, said on Tuesday that it would now sell tickets using the Uzbek som.

"In order to create favorable conditions for passengers from September 5, 2017, Uzbekistan Airways is beginning the sale of air tickets for its flights to all destinations from the Republic of Uzbekistan in the national currency," the company said.

On Sunday, a decree published on the presidential website called for the "exclusive use of market mechanisms in determining the exchange rate of the national currency in relation to foreign currency" and said citizens and companies would be able to purchase "unlimited" amounts of foreign currency. But instead of buying foreign cash, Uzbeks are getting the currency on special bank cards.

The same decree acknowledged that old foreign currency regulations in the country had "created an inefficient system of privileges and preferences for individual industries and business entities".

Ordinary Uzbeks queued in front of bank offices on Tuesday to legally buy and sell foreign currency for the first time in decades. By 1100 local time, there were dozens-long queues in front of banks and people were calling their friends and relatives to let them know about the liberalization.

"Of course there is a queue at the bank today," said Kamela Guliyeva, a sports promoter. "But the most important thing is that today free selling and buying of foreign currency has begun. I hope now everything would change for the better."

"Before, it used to be difficult for to hold and trade these things (foreign currency)," said Bekmurod Rahmatullayev, a pensioner. "Now it is good for people, were are glad."

Uzbeks had previously mostly bought foreign currency from traders operating illegally. One trader said on Tuesday the authorities were cracking down on the black market, but that it continued to operate as some people preferred their dollars in cash.

Some bank customers, who declined to be named, also said they were disappointed by the restriction on holding cash.

Many Uzbeks have developed a habit of keeping their savings in dollars to protect them from inflation and depreciation.

More importantly, though, the foreign exchange reform has lifted most of the restrictions on businesses, which were previously obliged to sell a chunk of their foreign currency revenue to the state at a knockdown rate.

The restrictions were one of the main reasons most Western companies have stayed out of the country of 32 million people, despite its rich natural resources and potentially large domestic market.

As a result of this, and other failures of the state-dominated economy, millions of Uzbeks have become migrant labourers, mostly working in Russia.

Foreign companies already present in Uzbekistan -- such as telecommunications operator VEON, formerly known as Vimpelcom, will benefit immediately from being able to repatriate profits.

"Overall, this is a positive development for VEON as, despite the significant reduction in the dollar-denominated value of its business, currency control was always an issue: the company could not upstream cash out of the country to the HQ level (be it Russia or Amsterdam)," VTB Capital analyst Ivan Kim said in a note on Tuesday.

While Mirziyoyev has praised the legacy of Karimov, under whom he served as prime minister for 13 years, he has also moved to distance himself from Karimov's authoritarian excesses and tried to tempt investors towards the commodity-rich republic.

In March, the European Bank for Reconstruction and Development announced it was set to resume lending in the country of 32 million after a decade-long standoff sparked by human rights concerns.

Human Rights Watch has also been invited back to the country following an enforced absence under Karimov, who ruled Uzbekistan with an iron fist from before independence from Moscow.
Last Update: Sep 05, 2017 4:51 pm
RELATED TOPICS