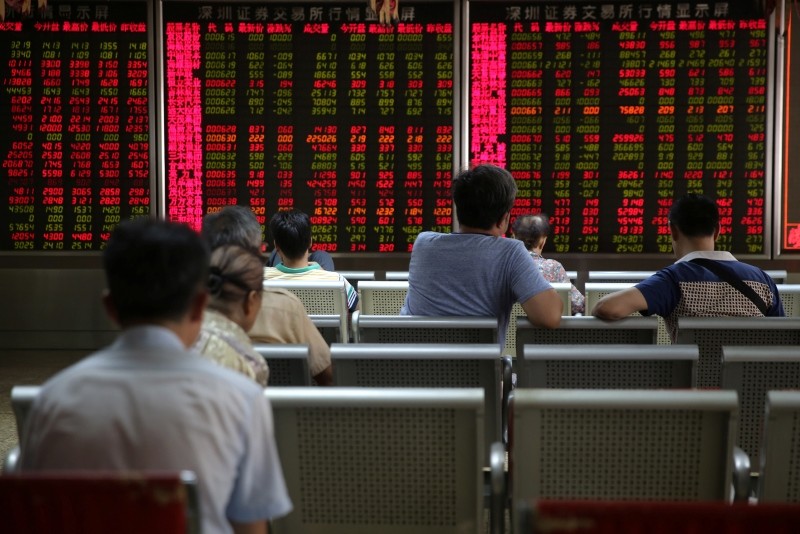 Chinese investors watch an electronic board showing the stock index and prices at a securities brokerage house in Beijing, China, June 26, 2018. (EPA Photo)
by Jun 26, 2018 12:00 am

A 0.3 percent rise from the FTSE in London and 0.4 percent gains from Frankfurt and Paris was a welcome sight after another bumpy Asian session had extended a sell-off that has now wiped $1.5 trillion off world stocks.

China's yuan had slumped to a near six-month low against the dollar, while 0.5-0.8 percent fall on big share markets left them down 20 percent from their January peaks, a threshold that defines a 'bear' market.

The dollar hovered near a 12-day low against a six-strong group of other top world currencies having drifted down versus the euro, yen and pound despite a modest uptick in U.S. bond yields.

"The selloff in risk assets has eased, but it is certainly not the last storm we are likely to see coming from that direction," said Societe Generale's global macro strategist Kit Juckes.

The tense atmosphere also kept metals on the defensive as financial markets worried about the wider global economic fallout of the U.S. administration's "America First' agenda.

U.S. Treasury Secretary Steven Mnuchin had ramped up the rhetoric again on Monday saying on Twitter that restrictions on investing in U.S. tech firms would apply "to all countries that are trying to steal our technology."

Wall Street had tumbled, with the S&P 500 and Nasdaq suffering their steepest losses in more than two months, and the Dow Jones closing below its 200-day moving average for the first time since June 2016.

China was hardest hit, dropping close to two percent at the session low before rebounding later in the trading day.

The benchmark Shanghai Composite Index closed down 0.5 percent at 2,844.51 points.

Tokyo followed the same pattern, even ending up fractionally in the black on bargain-hunting late in the day, with the benchmark Nikkei 225 index gaining 0.02 percent or 3.85 points to 22,342.00.

This trend was repeated across the region, with early losses pared in Seoul, Hong Kong and Sydney.

The so-called FAANG stocks, which have led momentum in U.S. stocks, were hammered too after having hit record intraday highs last week.

Asia then followed albeit in smaller scale. Tech-heavy indexes such as South Korea's KOSPI and Taiwan's weighted index fell 0.45 percent and 0.55 percent, respectively.

"Unlike the seemingly spur-of-the-moment tweets by President Trump and the retaliatory exchange of tariffs, Washington's bid to protect intellectual property is an issue at the heart of a trade row between two powers battling for future global supremacy," wrote Yoshimasa Maruyama, chief market economist at SMBC Nikko Securities in Tokyo.

"It's turning out to be a long-term bearish factor for the financial markets, as the United States is unlikely to back down at least through its midterm elections (in November)."

Another sign of the dust gradually settling in Europe was the first rise in European car shares in eight days. Carmakers are another likely target of U.S President Donald Trump's tariff plans.

The euro dipped back having reached a near two-week high of $1.1722 while the dollar was beginning to find some traction again against the yen. It was last at 109.67, having fallen to a two-week low of 109.365 yen. The yen often attracts safe-haven bids in times of political tension and market turmoil.

Brent crude oil futures were up 0.15 percent at $74.83 on uncertainty over Libya's capacity to deliver on exports commitments. Brent futures had fallen 1 percent overnight as receding investor risk appetite weighed on commodities.

Oil prices were capped after OPEC and its allies on Friday agreed to increase global supplies, albeit modestly.