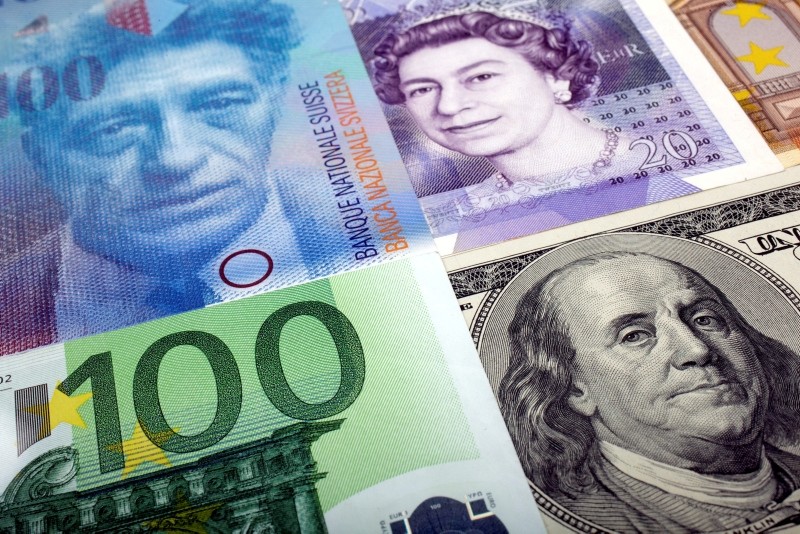 The dollar climbed to its highest level in over 13 months against a basket of currencies on Wednesday as investors stepped up their safe-haven holdings of the greenback due to worries about slowing Chinese growth and a weakening euro.

Signs the U.S. economy remains robust ahead of an expected interest rate hike by the Federal Reserve next month have helped the dollar outperform other currencies recently.

The dollar index that tracks the greenback against six currencies, rose above 96.9 for the first time since late June 2017.

"U.S. rates continue on an upward path ... That does provide fundamental support to the dollar in the medium term. We see scope for that move to continue," said Sunil Krishnan, head of multi-asset funds at Aviva Investors whose team helps to run assets of £108 billion.

As the dollar rise hit commodities, European stocks fell half a percent.

MSCI's all-country equity benchmark fell half a percent , though it stayed off one-month lows reached on Monday.

The dollar's strength is driving a capital exodus from across emerging markets, sending currencies such as the Argentine peso and Indian rupee to record lows. Emerging equities fell 2 percent, and are down almost 20 percent from January highs.

Sterling reached a 13-1/2 month low versus the dollar despite data showing Britain's inflation rate picked up in July for the first time this year. It was down 0.4 percent at $1.2673.

The Chinese yuan sagged nearly 0.8 percent to 6.9467 per dollar in offshore trading, hitting its weakest level since January 2017. The yuan's latest weakness followed a batch of disappointing economic data earlier this week. That stoked speculation whether the People's Bank of China would intervene or Beijing would introduce more fiscal stimulus to stem its currency from breaking through the 7-yuan mark.

"There's some talk of some stimulus, but we don't know what it would look like," Gofshteyn said.

The Turkish lira rose for a second day on central bank liquidity measures, while other emerging market currencies stumbled again, with the South African rand hitting a 13-month trough and the Indian rupee lingering near an all-time low.

The backdrop to all this is the escalation in global trade tensions, with Beijing now lodging a complaint to the World Trade Organization to determine the legality of U.S. tariff and subsidy policies.

Turkey also doubled tariffs on some U.S. imports, including alcohol, cars and tobacco "in response to the U.S. administration's deliberate attacks on our economy", Vice President Fuat Oktay wrote on Twitter. The lira has recovered 12 percent to 6.06 per dollar after hitting 7.24 on Monday.

Brokerage FXTM's global head of currency strategy, Jameel Ahmad, said the U.S.-Turkey tensions reminded investors that "it is not just the United States and China that stand at the heart of the global trade war concerns".