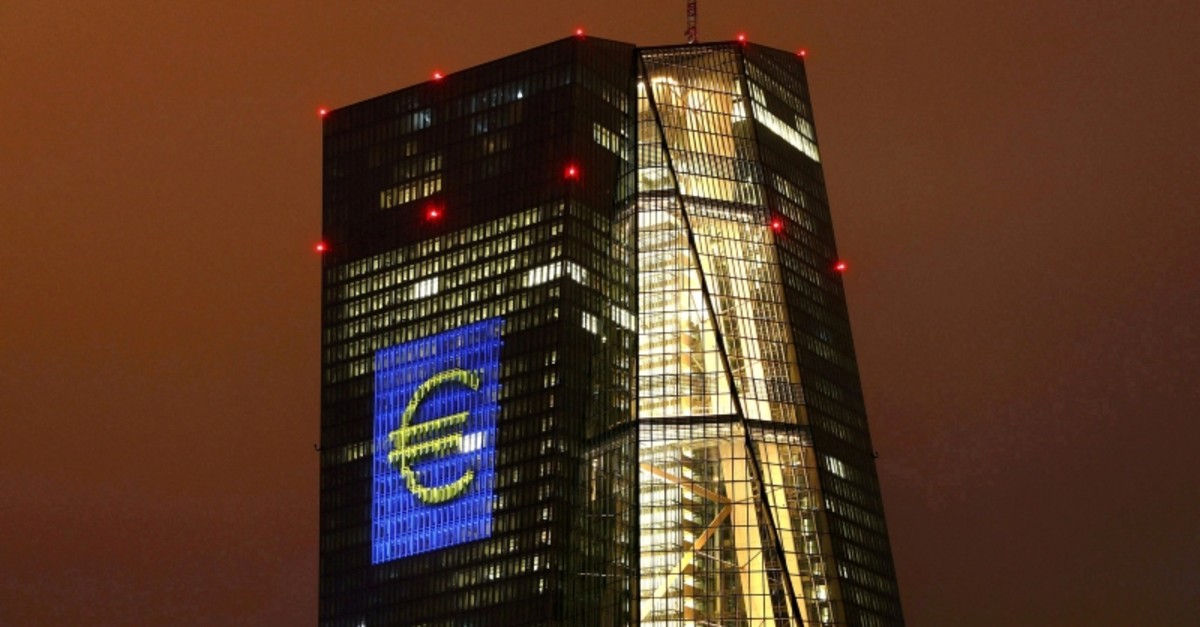 The headquarters of the European Central Bank (ECB) are illuminated with a giant euro sign in Frankfurt, Germany, March 12, 2016. (Reuters Photo)
by Compiled from Wire Services Jun 06, 2019 3:14 pm

The European Central Bank pushed back the timing of its first post-crisis interest rate hike again on Thursday and said it would continue paying banks for lending in its latest effort to revive a slowing euro zone economy.

The moves, which are bolder than analysts had expected until only a few weeks ago, come as a trade war between the United States and China overshadows the global economy and especially export-oriented euro zone countries such as Germany.

The central bank, which is the monetary authority for the eurozone, also said it would offer low rates on previously announced two-year loans to banks to help keep loans flowing to businesses.

The move comes just two days after Fed Chair Jay Powell signaled a shift in the direction of more stimulus instead of less. Powell said that the Fed is prepared to respond if it decides the Trump administration's trade conflicts are threatening the U.S. economy. Investors read his remarks as a signal that the Fed will likely cut interest rates later this year.

Both the ECB and the Fed have had to pause the withdrawal of massive monetary stimulus deployed in the wake of the Great Recession and the global financial crisis. The Fed had started raising rates but put monetary tightening on hold late last year, faced with doubts about where the economy might be headed.

Like the U.S., the 19-country eurozone is seeing economic growth and unemployment has fallen. The eurozone grew 0.4% in the first quarter. But indicators have been mixed recently. Businesses have become more cautious due to fears that the trade dispute between the U.S. and China will escalate and result in more tariffs, or import taxes, as U.S. President Donald Trump seeks to reduce China's trade surplus with the U.S.

Meanwhile, inflation has consistently lagged the ECB's goal of just under 2%, even despite a massive stimulus program that saw the central bank buy 2.6 trillion euros ($2.9 trillion) in bonds from March 2015 until the end of last year.

Central bank policies affect company and personal finances throughout the economy. Steps to lower rates and increase the availability of credit in theory make it easier and cheaper for companies, home buyers and consumers to borrow. Central bank policies can also have a strong influence on asset prices; low rates on savings can make riskier investments such as stocks relatively more attractive. The U.S. Standard & Poor's broad market index jumped 2% on Powell's comments.

The ECB's benchmark rate for lending to banks is zero. On top of that it has imposed a 0.4% negative interest rate on deposits it takes from banks, which pushes them to loan the money.