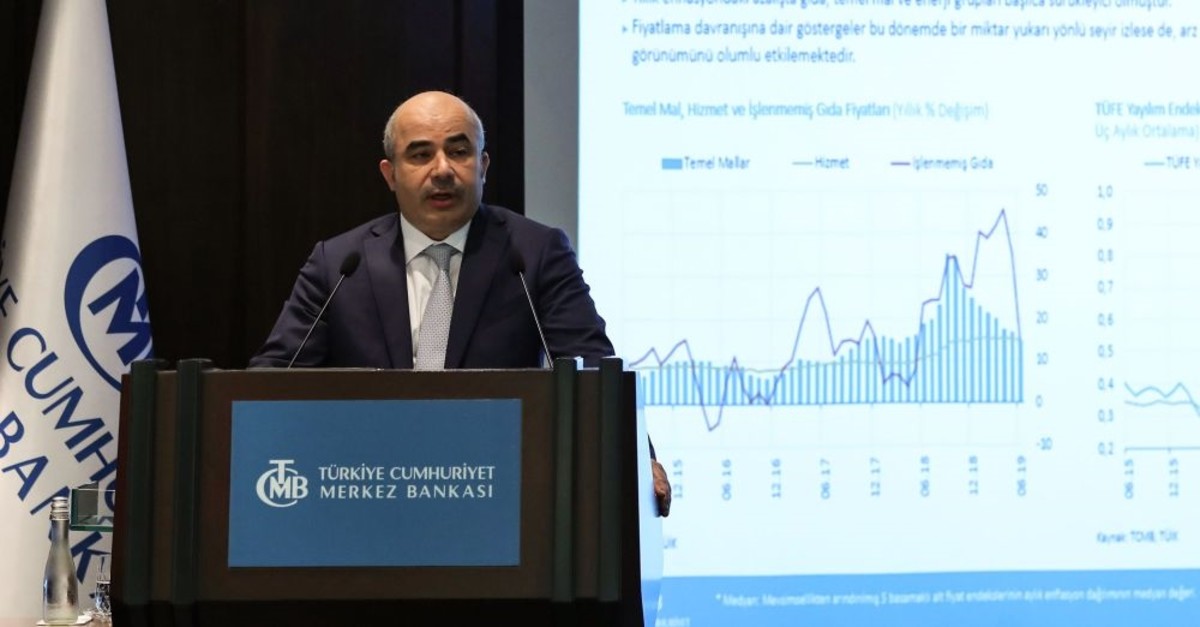 Citing better expectations and lower assumptions for food inflation and import prices, Turkey's central bank cut its inflation forecast for this year, while also paving the way for further rate cuts in the period ahead

Turkey's Central Bank went on to lower its year-end inflation forecast yesterday, opening a door for further easing in monetary policy in the months ahead. Inflation will end this year at 13%.9 percent, down from the 14.6% put forth in the its previous report in April, according to the Central Bank of the Republic of Turkey (CBRT). The inflation rate will fluctuate between 11.5% and 16% through the end of this year, said Murat Uysal, the bank's new governor, in his first press conference since taking to the helm earlier this month. The bank left estimates for next year and 2021 constant at 8.2% and 5.4%, respectively, Uysal said during the Inflation Report 2019-III presentation meeting in the capital Ankara Wednesday. The governor said the revision was driven by better expectations than in April, pointing to assumptions for lower food prices and Turkish lira denominated import prices, and lower-than-projected inflation in the second quarter of this year and improvement in the underlying trend, adding that inflation faced a supportive backdrop. The revision comes a week after the bank initiated an expected policy easing cycle with a significant 425-point decrease in its key interest rate last Thursday.

In a first in over four years, the bank at its Monetary Policy Committee (MPC) meeting, chaired for the first time by Uysal, cut its benchmark policy rate, the one-week repo rate, by 425 basis points from 24% to 19.75%. The decision marked the highest rate cut since 2002.Before its meeting last week, the CBRT had not made a change in its interest rates since it made an aggressive rate hike last September following speculative fluctuations that erupted last August.

Uysal suggested yesterday that their actual analysis and estimates showed that the bank has "considerable" room for maneuver in monetary policy in coming months, signaling possible further cuts in the coming period.

However, he said, "the usage, timing and the size of this will depend on the developments in price stability and developments on the point of financial stability."

"We will make [the decision] based on data," he added.

"During the period after the April Inflation Report, inflation declined markedly, falling below the forecast band. Improved inflation expectations owing to the disinflation and a tight monetary policy stance as well as the downward revisions to import prices and food prices have a positive impact on the year-end inflation forecast compared to the previous reporting period," the bank said in a report. It noted that the above-mentioned forecasts are based on a framework in which the global financial conditions will follow a moderate course and the recent gradual improvement in the country risk premium will continue in the upcoming period.

"Projections rely on an outlook in which the extent of monetary tightness will be determined in a way to ensure the continuation of the disinflation process and its consistency with the target path. Additionally, it is assumed that the fiscal policy stance will be determined in coordination with monetary policy with a focus on price stability and macroeconomic rebalancing in the remainder of the year," the report read.

"Under a tight monetary policy stance and strong policy coordination focused on bringing inflation down, inflation is projected to converge gradually to the target of 5%," Uysal said.

He underlined that the bank continues to use all available tools to ensure financial stability when necessary.

The bank also decreased its food inflation forecast to 15% for this year, down from 16% in the previous report, Uysal said.

Having followed months of decline and as a result of the ongoing stabilization process in the economy, the annual inflation in Turkey in June fell to the lowest rate of inflation since June of last year, when it was 15.39%.

Annual inflation increased by 15.72% year-on-year last month, a sharp decline compared to 18.71% in May, according to the Turkish Statistical Institute (TurkStat). The sharp drop in June inflation was driven by a high base effect and a drop in food prices.

Government officials and economists project that inflation may fall to single digits in the September-October period due to the base effect. Consumer prices in June increased only 0.03% month-on-month, according to TurkStat, while economists expected an increase of 0.08%. The 12-month average hike in consumer prices was 19.88% in June.

As laid out in Turkey's New Economy Program (NEP) announced last September, this year the country's inflation rate target is 15.9%, followed by 9.8% next year and 6% in 2021.

Uysal further said that the bank would preserve a reasonable rate of real return for investors when setting rates, without specifying the level.

BANK INDEPENDENT IN USE OF TOOLS TO REACH INFLATION TARGET

Responding to a question on the CBRT's independence following the dismissal of former governor Murat Çetinkaya, Uysal said the bank retained control over setting rates and that removal of the former governor was done in line with existing legislation.

Uysal said the institution had full independence in its use of tools to reach its inflation target and does not worry about independence when it is making a decision about that target.

Erdoğan said Turkey paid a heavy price for some of the decisions Çetinkaya made himself.

"His decisions were becoming unbearable. Seeing all this, we evaluated the situation, and decided that a change was necessary," the president had said. "Of course, the central bank is crucial, especially for finance. If we fail to reform the bank, we may go through serious hardships. That is why we emphasize reform and insist on the importance of financial stability," Erdoğan added.

Sources said earlier that the differences between the government and the governor over monetary policy had deepened in the past few months. Erdoğan has repeatedly railed against high interest rates and called for them to be lowered in a bid to revive the economy.

Uysal yesterday drew a distinction between independence in the area of instruments and objectives. "The central bank does not determine inflation alone," noted Uysal.

"According to the legal framework, the inflation target is determined together with the government. But we are independent with regards to the tools we can use to achieve that objective," The Financial Times cited the governor as saying.

"When we carry out our monetary policy committee meetings, we decide independently. This is what we did in the last meeting that we had," he added.

After speaking to journalists and investors for over an hour at yesterday's meeting, Uysal said he wanted to strengthen the CBRT's communications. "We will share our policies much more openly with the public," he added.