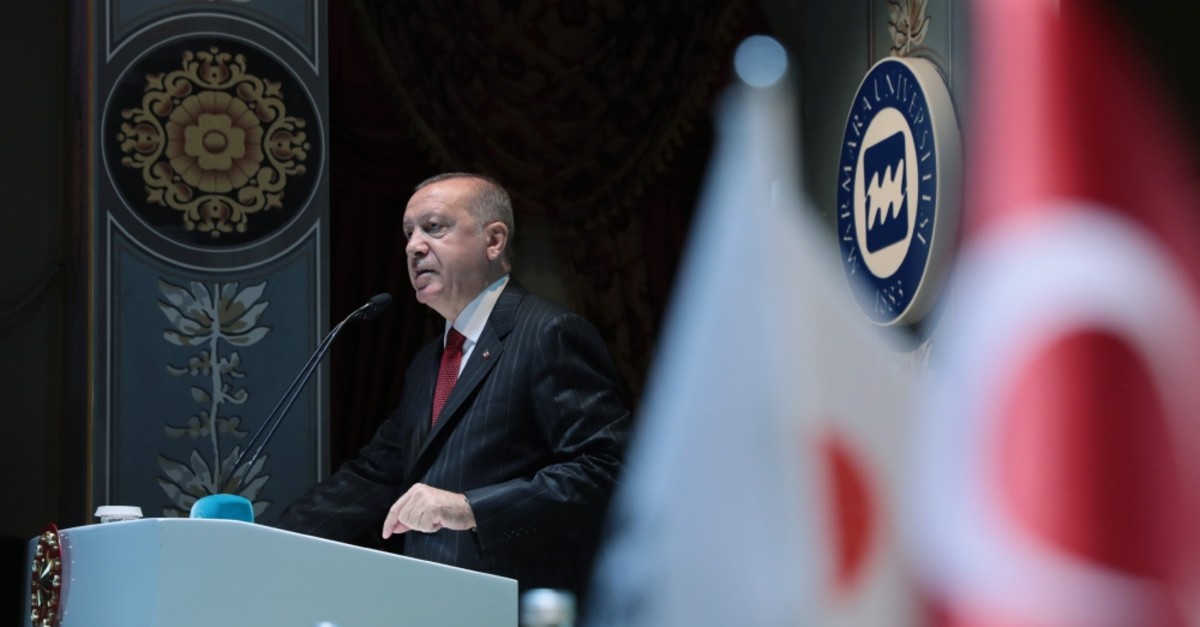 While the global trend to form new financial structures is emerging worldwide with fears of a new recession looming, Turkey is becoming a participant in the process by pursuing diversification of financial instruments

The world of finance was shaken by a great earthquake in 2008. The name of the brand new earthquake was the subprime market, a phenomenon that emerged in the 1990s, which grew exponentially during the mid-2000s and exploded in 2008 with a spillover effect felt all across the world. After more than a decade, countries around the world, including Turkey, are still pondering new financial and economic structures to avoid a similar crisis. In reference to the agenda to become involved in this transformation trend, "Turkey has demonstrated that it is capable of becoming an actor in this changing game of finance," President Recep Tayyip Erdoğan said Monday.

In an address at a finance conference at the Marmara University in Istanbul, the president said, "A number of countries are working to carve out new financial and economic structures in the midst of a world pervaded by economic recession," citing Turkey's plan to develop new financial structures and instruments.

The signals for an emerging trend of restructuring in the global economy present an opportunity for Turkey to seize as the country is pursuing its own agenda of economic reforms.

"The 2008 financial crisis unraveled the fact that the current system is unsustainable but the system has remained intact, not even questioned. Today, the world is surrounded by a new fear of economic recession," Erdoğan said. "The interventions which created the image that the crisis has been surmounted are no longer effectively working out."

The president also stressed that within the framework of the agenda to diversify alternative finance instruments and make Turkey a global player in finance, the Istanbul Finance Center (IFC) project will be inaugurated in 2022.

"I believe that it will be a regional center of attraction in Islamic finance and financial technologies," he added.

The Istanbul Finance Center project, which started in 2009 and is currently being developed in Istanbul's Ataşehir district, has been designed to be one of the world's major financial centers. This landmark government project aims to build a financial center even larger than the existing ones in New York, London and Dubai and also aims to make Istanbul the center of finance internationally.

In the ranking, Istanbul gained 30 points to 620 points compared to the same period in September 2018. In terms of its position in Eastern Europe and Central Asia, Istanbul jumped from fourth to second place. The city saw its best ranking in September 2014 when it ranked 42nd.

Recently, Turkey's Sovereign Wealth Fund (SWF) announced that it backs the acceleration of the Istanbul Finance Center project and is set to be the initial financial investor in the IFC's structure.

During his address, the president also highlighted the shortcomings of the Turkish financial system. Despite the huge diversification of alternative financial instruments, the banking sector still accounts for 90% of the financial industry, he noted.

Erdoğan stressed that that the share of banking in developed markets demonstrates a more balanced breakdown in the finance sector and indicated that Turkey will take bolder steps to expand the share of alternative financial instruments in a resolute manner.

The president particularly pointed out the importance of participation banking in ensuring a more robust and stable economy and drew attention to Turkey's lack of operations in that field.

"Our target is to raise the share of participation finance (Islamic finance) in total banking assets to 15% as of 2025 from its current level of 5%," he said, while expressing that he wanted to see everyone's support on the matter to reach this goal.

However, he also cautioned that the interest rates of the banking system should not be applied to participation finance.

Emphasizing that alternative financial transactions were spreading rapidly around the world, the president said he believed that the current interest-based system would give way to new financial architecture in the future, adding that more and more countries are preferring new finance models.

Erdoğan also acknowledged that Turkey needed a strong economy and a sound financial system. "However," he remarked, "the system that is supposed to fuel economic growth and development has become a dominant force governing the entire economic system and threatening stability."