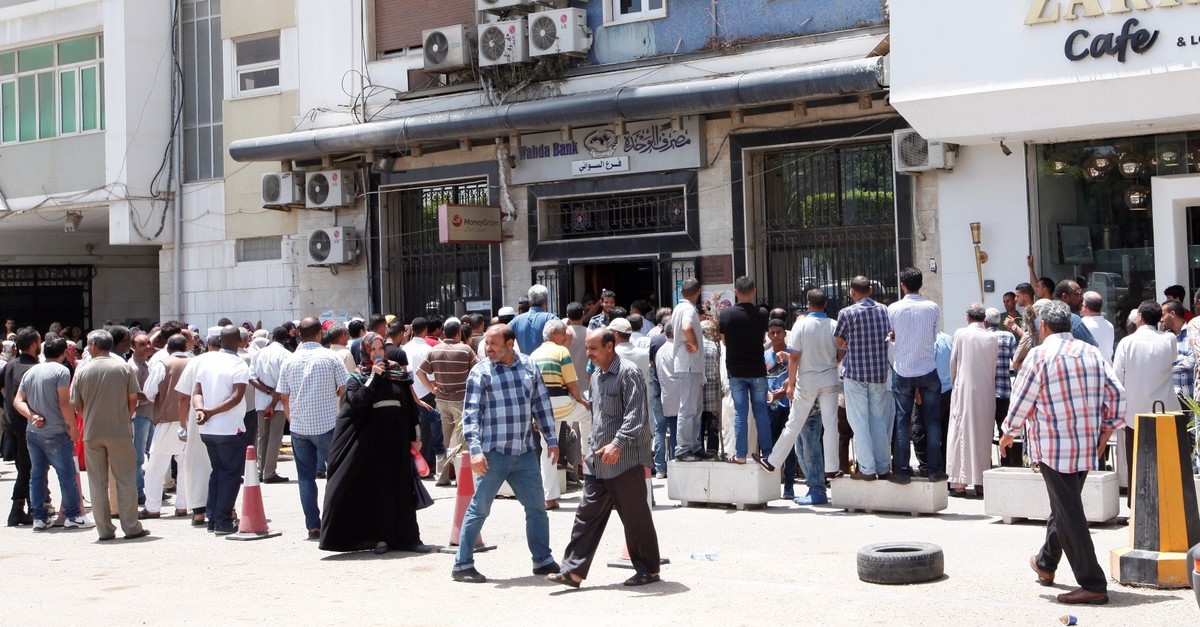 After years of revolution and a series of reforms, Libyan citizens are still suffering from a liquidity crisis in the financial system that causes long lines in front of banks to withdraw only small amounts of cash

Under the unbearable summer sun, people stand in long lines in Tripoli streets. In almost every street and square in the city center, people get up early in the morning to wait in line until the next day or sometimes even longer. The scene raises the inevitable question "What are they waiting for?" but anyone with a keen eye can see that they are lined up in front of the banks. Exhausted from the ongoing war and the noise of generators running in the city, Libyans – men and women, old and young – are simply trying to withdraw cash from their accounts to buy the necessary goods to survive.

This is not an unusual landscape for ordinary Libyans. Sometimes they have to wait in line for a couple of days to withdraw cash from the bank. There is a simple explanation for the long wait, according to Libyan experts: the lack of liquidity. But the reasons for the lack of liquidity are not that simple to explain or easy to fathom.

In the years that followed the revolution, the inability to institute a stable government in Libya has led to massive abuse of the central bank's resources, Mohammed al-Raeid, the chairman of the Libyan Commerce and Industry Chamber and a member of the House of Representatives for Misrata, told Daily Sabah in an exclusive interview at his office in Tripoli Tower.

In a frustrated tone, al-Raeid explained how the armed groups drained and abused the central bank resources, siphoning cash out of the system, especially after 2013 when the central bank allowed other lenders to sell 5,000 Libyan dinars ($3,540) per person. "The militants made hundreds of thousands of dinars during two years in the aftermath of the central bank decision by abusing the system with forged documents. They took the money out of the bank, traded it in the black market and earned billions," he said.

The Libyan government's project to annually provide $500 for each family in the country via special credit cards has also become another source of malpractice, Raied explained.

"Since cardholders could only withdraw the foreign currency outside Libya, most families are unable to afford this. Therefore, it has turned into abuse in the hands of some powerful people who use this scheme to get dollars and sell it on the black market."

Al-Raeid, who is also a well-known businessman in Libya, remarked, "People do not trust the banks anymore and the lack of confidence has created a huge liquidity crisis. People only buy and sell dollar and dinar on the black market."

A report by the World Bank released in February also echoed and confirmed al-Raeid's woes that high fiduciary risks in Libya "accelerate the depletion of currency reserves, entrench corruption, erode trust in the banking sector and have contributed to the liquidity crisis."

A visitor to the Libyan capital would definitely make their way to Martyrs' Square and see the old city souk adjacent to the Red Castle. At the end of the old souk, which is filled with various shops and jewelry stores, the giant crowd in front of a coffeehouse is impossible to miss. The crowd, consisting of men at all ages, gather at this point right across the Libyan central bank every business day and trade dollars and gold throughout the day. This is the main black market – where it is not easy to snap a photograph as traders are very observant of what is going on in their immediate circle.

Al-Raeid also highlighted that several cases of extortion by militiamen of businesspeople and bank officials were recorded in Libya. He argued that the militia groups forced bank officials to provide them with letters of credit, originally used for importing goods and products from abroad.

"They [the militia] used these letters of credit to buy dollars at the official exchange rate of the central bank and then sell the dollars back on the black market," he argued.

While these practices drained central bank resources, they also deteriorated the confidence in the banking sector of the country, which in the end exacerbated the liquidity crisis in the country.

Furthermore, the political crisis in the country, having peaked in 2014, led to a split rival governments and military alliances based in Tripoli and the east, a division that has been reflected in key institutions including the central bank and the National Oil Corporation. However, revenues from oil sales, Libya's main source of income making up nearly 98% of total export revenues, have continued to be processed by the central bank in Tripoli, home to the internationally-recognized government established in 2016. As oil output fluctuated over the past five years, a large black market for foreign exchange developed, banks ran short of cash, and living standards dropped sharply.

Libyan citizens began to feel the liquidity bottleneck particularly in 2015, İbrahim al-Senussi, a Libyan expert working for a local economy magazine, observed and elaborated regarding the government's efforts to stabilize the currency market with a set of measures.

As far as al-Senussi is concerned, one of the main underlying reasons for the liquidity crisis in the country is the lack of infrastructure for the payment methods, namely electronic payments and deposit or credit card usage.

Some of the banks, Jumhouriya and Assaray, commenced the practice of payment by cards. While Jumhouriya reached more than 2,000 points of sales, the Assaray Bank had around 1,600 points of sale in the country. "However," al-Senussi said, "the financial illiteracy and the inefficient telecommunication infrastructure prevented this practice from becoming mainstream in the whole country. People are still using cash in their transactions."

In order to increase financial literacy and raise awareness regarding the usage of e-payment methods, the Assaray Bank and Tadawul Tech – a payment system introduced by the Assaray – previously organized a workshop to promote e-payment services.

With a plan of improving the financial conditions and restoring confidence in the banking system, the Libyan government and central bank took a set of measures in September 2018. During the year, Libyan officials worked to reduce the gap between the official exchange rate, fixed at 1.3 Libyan dinars to $1, and the black market rate, which has fluctuated at around 9 to 10 dinars per dollar. In order to stabilize the fluctuation of the national currency and prevent corruption by militia groups, who took advantage of the huge discrepancy between the official central bank rates and the black market rates, officials introduced a second rate for commercial transactions at 3.90 dinars per dollar. Now, businesspeople can buy letters of credit at this commercial rate. Moreover, Libya's Tripoli government has impos

ed also 183% fee on foreign currency transactions in an effort to narrow the difference between the official central bank and black market rates, squeezing liquidity and fueled inflation in the North African nation.

The measures stabilized the currency market and reduced the factions' stranglehold on the money supply. Yet, there is still a small gap between the rates, and the liquidity crisis persists. The Libyan dinar trades at 4 to 5 dinars per dollar in the black market.

Al-Senussi argued that before the reforms introduced in late 2018, around $28 billion worth of letters of credit had been bought by the militia, and a large sum of this money was traded on the black market.

The financial sector in Libya continues to suffer from a liquidity crisis despite sharp increases in the money supply at the banks, which reached 11.3% at the end of September 2018 with the reforms since currency circulating in the banking system also on a steady rise. The World Bank report also highlighted that the currency in circulation outside banks represented 28% of the money supply by the end of September 2018 compared to 16.4% in 2010, reflecting a lack of trust in the banking system.

With the continuing military offensive launched by self-proclaimed general Khalifa Haftar on the capital Tripoli with the backing of his regional and international actors, it is difficult for decision makers and policymakers to agree on the critical reforms needed to improve the macroeconomic situation. They argue that the ongoing war in the country has crippled the impact of the economic reforms since September 2018. The liquidity crisis, multiple exchange rates, subsidies, high wage bill and inflation continue to wreak havoc on the fiscal stability, creating scenes of long lines in the Libyan capital.