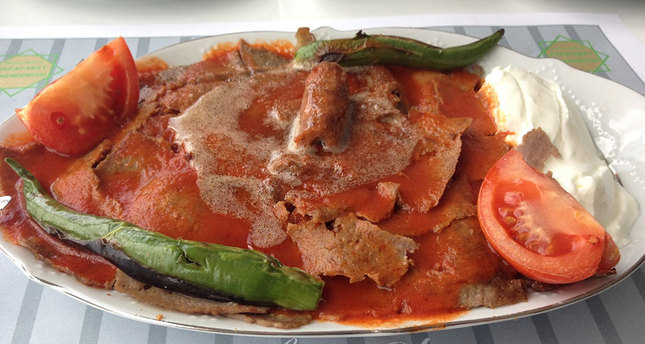 Faced with the task of driving from Assos to Istanbul and being forced to choose which route to take - both include ships, one crossing the Dardanelles, the other the Sea of Marmara - it was the possibility of paying a stop to Susurluk to enjoy an Iskender Kebab from one of its original family establishments that tipped the scale in favor of the inland drive through Balıkesir.

The decision to choose a specific route solely to enjoy an Iskender Kebab from the descendants of its original proprietor is perhaps even more poignant due to the sheer fact that I am a vegetarian and have been since I was nine years old. As a vegetarian, this dish, which consists of thin shavings of lamb over crispy cubes of pide (Turkish flatbread) covered in a hot tomato sauce and sizzling sheep butter accompanied by a dollop of soothing yogurt, was the only memory of meat that I ever felt a longing for.

Therefore, I was thrilled to discover that the Iskenderoglu family chain of restaurants now offers a vegetarian Iskender Kebab, which consists of the perfect medley of charred eggplant, grilled tomatoes and roasted peppers combined with a delicious tomato sauce laid upon the same bed of sliced pide and accompanied by creamy yogurt with a drizzle of sizzling butter. This combination of the best flavors offered up in Turkish cuisine all on a single plate has easily become far and away my favorite meal.

This of course should not have come as much of a surprise as the Iskenderoglu (son of Iskender) family legacy defined by its pioneering of new inventive ways to create the ultimate experience in taste and satisfaction. Not only was Bursa native Iskender Efendi the man who created his namesake Iskender Kebab nearly 150 years ago, he was also the visionary who turned the horizontal spit into a vertical rotisserie, thereby creating the global delight that is now known as döner (which literally means "rotating") in Turkish, gyros in Greek and shawarma in Arabic. As the story goes, in the mid-19th century, Sabit Dede was a well-known butcher who would sell lamb on horseback, while his nephew Iskender Efendi would roast the meat on a horizontal spit. It was during this time when he came up with the idea of grilling the lamb on an upright spit, so its juices would no longer fall into the flames, creating the aroma of burning meat. In addition, noticing that customers were being served inconsistent cuts of lamb, he also came up with the ingenious idea of breaking down the meat into thin sheets layered on top of one another on an upright rotisserie which is then cooked by a charcoal fire with layered wood embers, ensuring the end product would provide customers with a unique and delicious medley of cuts in one melt-in-your-mouth bite.

As legend has it, Iskender Efendi first tried out his invention in his father's restaurant in Bursa in 1867, where he would thinly slice the meat and serve it atop a bed of pide accompanied by a tomato sauce, sizzling sheep butter and yogurt. What emerged was not only döner but also the beloved Iskender Kebab as we all know and love it today.

In an attempt to maintain the same high-level standards established by the dish's namesake, the Iskenderoglu family has since trademarked Iskender Kebab and branched out into three different companies serving their grandfather's legacy in Bursa, Balıkesir and Istanbul, all which offer the scrumptious vegetarian Iskender Kebab.

Iskender Yavuz Iskenderoglu operates the flagship restaurant as well as half a dozen others in Bursa, two destinations in Balıkesir and two branches in Istanbul (www.iskender.com), while Iskender, the offshoot of Cevat Iskenderoglu and his successors, operate three shops in Bursa and one branch in Susurluk (www.iskender.com.tr). Kebabçı Iskender, which is also run by descendants of Iskender Iskenderoglu, operate two locations in Istanbul's Kadıköy and Erenköy districts. (http://www.iskenderkebabi.com)