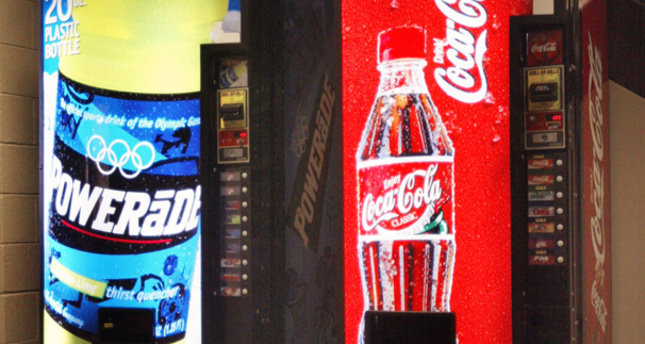 by Anadolu Agency May 06, 2014 12:00 am
ATLANTA — Coca-Cola has announced plans to remove a controversial flavoring stabilizer from their Powerade drinks, following concerns an element of the ingredient is also found in flame retardants.

The move follows PepsiCo's decision to remove the ingredient, brominated vegetable oil (BVO), which is not approved for use as a food additive in Japan or the European Union.

Researchers at the Mayo Clinic said health concerns over BVO have been raised because it contains bromine, an element it said is found in brominated flame retardants. BVO is also used in Coca-Cola fruit drinks such as Fanta.

Medical researchers there said excessive consumption of BVO has been linked to memory loss and skin and nerve problems.

The decision by Coca-Cola to remove BVO from Powerade comes as food makers feel the increasing pressure to reconsider food practices and follows Subway's commitment to removing the so-called 'yoga mat chemical' azodicarbonamide earlier this year, which is reportedly linked to respiratory issues, allergies and asthma.

Coca-Cola spokesman Josh Gold insisted the decision to remove BVO was not because of a safety issue. "All of our beverages, including those with BVO, are safe and always have been - and comply with all regulations in the countries where they are sold," he said in a statement.