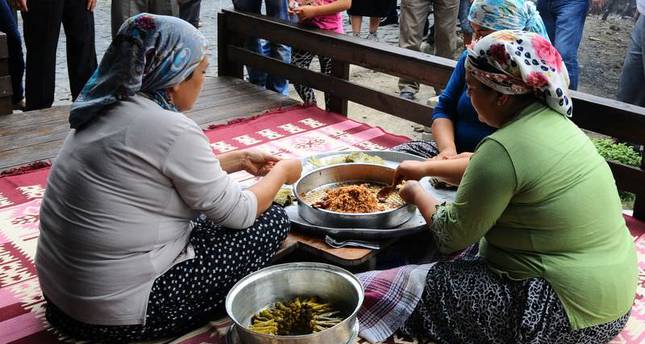 by Anadolu Agency Sep 05, 2014 12:00 am
The southern Hatay province is hosting "Mediterranean Culinary Days" organized by the governorship until this Saturday. On the first day of the event, local women marched along the city wearing kitchen aprons accompanied with Gagauzian Turkish folk dancers, national sportsmen, disabled people and pre-school children. Local fruits like melon, grapes and mandarin were presented on large baskets. The group started walking from the Mayor Ürgen Square to Antakya High School's garden where the colorful event takes place.

The event welcomes local and international gourmets, Michelin-starred chefs, academics and press members along with a number of other visitors. All guests are given kitchen appliances as gifts. A horsedrawn carriage decorated with bay leaves drew great attention. Two people dressed as Greek deities Apollo and Daphne took a tour around the city while distributing little gifts to passers-by. Some representatives of different religious comminutes gave cloves to locals.

Seventy-seven chefs from 17 countries from Italy, Spain, Greece, Lebanon, Morocco and France to Bosnia-Herzegovina present hot and cold traditional meals during the fourday culinary fest. Governor Mehmet Celalettin Lekesiz said Hatay is a junction where many religions from East to West come together.

He reminded that the city shows the characteristics of Hatay's rich history and cultural heritage. Lekesiz hopes the festival will turn into an annual event which will be held in different countries each year. Master chefs and gourmets gave full marks to traditional Hatay cuisine such as "künefe" (cheese pastry soaked in sweet sugar syrup), lamb kebab in curl paper and spicy Iskenderun shrimp.

Visitors had the chance to visit the Medical and Aromatic Plants Museum and watched world-renowned Persian chef Chomicha Chafay, known as "the Queen of Spice" cooking a traditional dish "Sapha." Locals enjoyed tasting almost 600 meals by other famous chefs.Supported by 20 public institutions, the event will end with a concert by Gagauzian Turkish Orchestra.