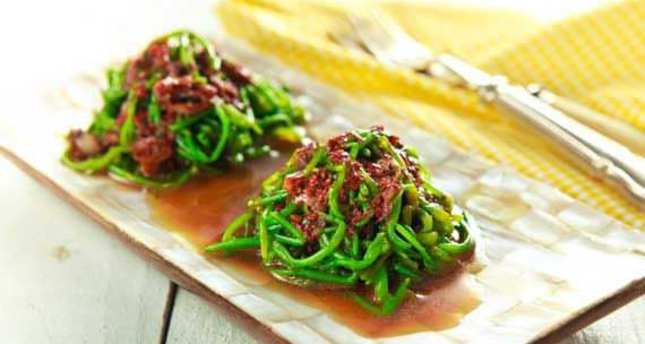 Whether you have come across these very special greens at local markets or in specialist eateries, Turks take pride in the wonderfully wide variety of wild edible herbs this country has to offer, and rightly so

Turkey, which has the largest coastal area in the Mediterranean and the richest soil of the Aegean coast, has an immense variety of wild edible greens and herbs that you may have come across in dishes on your travels through Turkey or at local bazaars. Due to its climate and geographical positioning, Turkey has over ten thousand plant species, which is more than all of the countries in Europe combined.

In addition, one third of these plants are endemic to Turkey and many are edible and have medicinal properties. Anatolian civilizations have been well versed in the traditional knowledge of using plants as food and medicine since the Paleolithic era.Wild edibles now constitute a major component of the popular Mediterranean diet.

The tradition of gathering wild edible greens continues in villages throughout Turkey and constitutes an integral component of Turkish cuisine. The following is a concise guide to some of the most popular edible greens Turkey has to offer and some of their intriguing medicinal properties.

You may already be familiar with meze favorites purslane (semizotu), which is served with yogurt and samphire (deniz börülcesi), the preparation of which involves blanching and then pulling out the central stringy part, which is then served in a salad of olive oil, lemon and garlic.

One of the most interesting and tasty wild edible greens found in local markets if you are lucky is undoubtedly wild asparagus (tilkişen). These thin shoots are sold in bunches in local bazaars. It is time-consuming to collect and therefore pricier than other greens, but well worth it. In Turkey, it is generally sautéed in oil and cooked with eggs similar to a frittata.

Mallow (ebegumeci) is another popular green that is cooked similar to spinach, with sautéed onions, lamb meat and tomatoes.Large mallow leaves can also be used as wrappers for dolma. Mallow is known to preserve the respiratory and digestive tract and it can be brewed as a mouthwash to heal mouth sores.

Poppy greens (gelincik) resemble arugula and are edible before the flower's pods form, as afterwards the leaves become a slight opiate, it's infusions are used for breathing problems, in particular asthma, bronchitis and whooping cough and it is known to have skin healing properties.
While the greens are used in böreks or served sautéed in olive oil, the flower petals produce a stunning red jam.

Wild fennel (arapsaci) has a sharp anise- like flavor, is good for stomach cramps, digestion and increasing the production of mother's milk, and is generally prepared with either eggs or lamb.

Greens such as wild radish greens (turp otu) and wild mustard (hardalotu) are both delicious, boiled or in salads. Wild mustard is known to be a laxative and a bath in water steeped with the herb is said to be good for rheumatism.

Golden thistle (şevketi Bostan) is a yellow-flowered fleshy thistle that is commonly cooked with lamb and chickpeas.Its tea is good for stomachaches and digestion and can be rubbed on wounds for faster healing.

Although the handling and preparation of Stinging nettle (isirganotu) is daunting, once blanched it has a flavorful distinctive taste and is prepared like many other wild edible plants, either sautéed in oil, cooked with eggs or used as pastry fillings.Its tea is widely brewed and consumed for its many medicinal benefits, which include being a diuretic and having anti-inflammatory properties.

Wild chicory (hindiba) is served in salads and steamed and is an anti perspirant, diuretic and diaphoretic and is said to help get rid of gall bladder stones.Sorrel (kuzu kulağı) is regularly served in salads, has a tart flavor and is high in Vitamin C. Brewed; it has a number of medicinal properties including acting as a fever reducer, as a gargle for toothaches and as a skin tonic for acne, psoriasis and eczema.

Slim amaranth (sirken) is incorporated into pastries, meat dishes and eggs and is known to be a blood purifier that also helps to prevent and be rid of intestinal worms.

Lesser water parsnip (su kazayağı), also referred to as wild celery, is a member of the parsley family and is prepared in a variety of manners such as sautéed and cooked with bulgur, or in omelets and meat dishes and its essence used in drops is said to prevent and eradicate intestinal worms.

Last, but certainly not least, is a type of wild garlic stalks (körmen), which is delicious in börek and breads. This is just one of the dozens of wild onion and garlic species growing in Turkey.