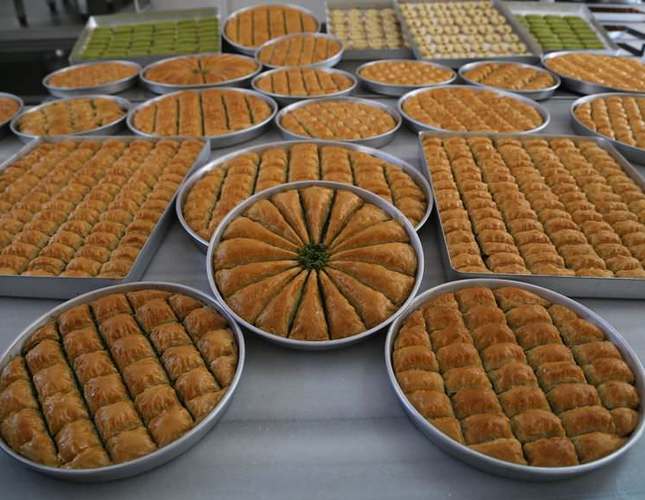 There is no denying that desserts are a massive part of Turkish culture. When walking around Istanbul, you can see a pastry shop just on almost every corner with mouthwatering displays of delicious Turkish treats that you must try

In Turkey, desserts are a social ritual, a must have item meant to be shared. At any time of day and even night, family or friends just might ring the doorbell and come over to engage in some gossip, sip some Turkish coffee or tea and eat some delicious treats. There is a vast variety of Turkish desserts out there that must be tried for that heavenly experience. We're here to help.

Baklava: It wouldn't be a Turkish dessert list without baklava, would it? This mouthwatering pastry made from 35 stacks of thin phyllo dough brushed with butter and sugar syrup isn't on the top of our list for nothing. With numerous shapes, sizes and flavors, there is something for all taste buds out there. The most common types of baklava are "cevizli baklava" (walnut baklava) and "fındıklı baklava (pistachio baklava)." Even though these two are delicious on their own, keep an eye out for other variations of baklava such as "ceviz dolama," which are round, slightly more compact and made from walnuts or the similarly shaped "saray sarması," which features a combination of both walnuts and pistachios. There is also a "vişneli baklava" (sour cherry baklava), "kestaneli baklava" (chestnut baklava), "çikolatalı baklava" (chocolate baklava) and "özel kare baklava," which is a special baklava with extra pistachios. One of the most famous places to eat baklava is Güllüoğlu in Karaköy. Open since 1871, this shop serves baklava with a luscious dollop of "kaymak" (clotted cream) for the ultimate baklava experience. You can also try Diyar Burma on Bağdat Avenue, Köşkeroğlu in Karaköy, Develi Baklava in Samatya, Kalamış, Etiler and Ataşehir.

Revani: Revani is an appetizing, dense sponge cake that gets its texture from semolina flour. Semolina is ground wheat that is typically used to make pasta and can be found in other Turkish desserts as well, such as helva, which is made simply from semolina flour, butter, sugar, milk and pine nuts. Revani is sometimes served with ice cream and a shot of Turkish rakı, Turkey's signature anise liquor.

Aşure: Aşure, also referred to as Noah's pudding, is a traditional Turkish dessert. Considered to be one of the oldest desserts in the world, aşure carries hints of orange and a distinctive texture thanks to figs, apricots, hazelnuts, garbanzo beans, golden raisins and bulgur or barley. However, the fruits and nuts can vary according to preference. This pudding is more than just a delicious dessert – it is also great for the immune system because of its rich carbohydrates. It is both tempting and delectable.
Two of the best places to have a delicious bowl of aşure are Hafız Mustafa located in Sirkeci, Eminönü and Taksim and The Pudding Shop in Sultanahmet.

Maraş dondurması (Maraş ice cream): Have you ever had to cut a piece of ice cream with a knife? If you haven't, you must try Maraş ice cream for an unforgettable experience. Particularly in Istanbul, traditional Maraş ice cream is sold by street vendors. The salesmen wear regional costumes from the Kahramanmaraş area and, depending on their mood, it may be a while before you can have a taste of the chewy ice cream.

You don't have to go out of your way to eat this tasty treat. Maraş ice cream is sold on the street in carts; you may see some on İstiklal Avenue.

Osmanlı Macunu (Ottoman paste): "Osmanlı macunu" is created by vendors outside tourist destinations, making a show of fascinating colored sugar twirls from a large tin onto a stick. The origin of the candy dates back to the Ottoman Empire when a spiced paste known as mesir macunu was used to cure Ayşe Hafsa Sultan, mother of Suleyman the Magnificent, who had fallen ill after the death of her husband. It was made from a grape molasses called "pekmez" and 41 different plants and spices. Hafsa Sultan was so pleased with the results that she created a festival in its honor – every March 22 is the Mesir Macunu Celebration when wrapped candies are tossed from the roof of the mosque in Manisa, an Anatolian city in the Aegean region.
The modern version of "macun" sold on the streets of Sultanahmet to tourists is a far cry from the spicy paste of years past. Still, this Turkish sweet is a must try.

You can come across vendors selling Osmanlı paste near any tourist attraction like Sultanahmet and Galata Tower.

Lokma: Lokma is a Mediterranean answer to the doughnut, but even better. Sweet, fried, crunchy … what else could you want from a sweet? Eating a handful of this amazing dessert never hurt anybody. Lokma – "bite" in Turkish – is a bite-size, chewy, yet extremely delicious dessert that is said to have been created by the sultan's cooks in Ottoman palaces, but these days it's a popular dessert for Turks to cook at home and serve to friends and family after dinner.

You can find the best lokma in Istanbul at Tilla Lokma in Erenköy. Make sure you stop by this lokma shop and have a "bite" of fun. Wherever and whatever these treats may be, make sure you have a taste of Turkish desserts.
Last Update: Dec 27, 2014 4:11 pm
RELATED TOPICS