Şanlıurfa gets museum dedicated to food 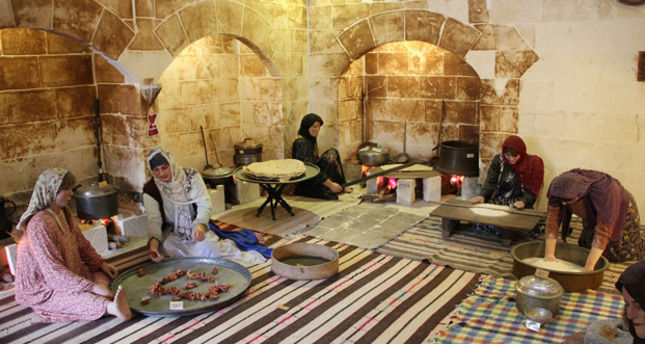 The Kitchen Museum in Şanlıurfa, which aims to preserve traditional dishes dating back centuries, showcases local flavors as well as utensils in its kitchens

The Kitchen Museum in Şanlıurfa, which aims to preserve centuries-old traditional foods, displays local tastes and tools used in the kitchens.

Turkey's Şanlıurfa which is known for its palatal delights and nomination for UNESCO's City of Gastronomy is home to the Kitchen Museum. Founded by Şanlıurfa Metropolitan Municipality three years ago at Yıldız Square, the museum intends to pass down local tastes to the next generation. The museum, which features wax sculptures of women in local dresses, places important foods of Şanlıurfa on display such as "Kazan Kebab" with eggplant and tomato, "Boranı", "Çiğ Köfte," "Lahmacun," "Ağzı Açık" and "Ağzı Yamuk" along with the city's famous desserts "Şıllık," "Kadayıf," "Küncülü Akit," "Kalbur Tatlısı" and "Katmer." Moreover, kitchen equipments that are used while preparing the local foods are showcased at the museum.

Hosting thousands of local and foreign tourists every year, the Kitchen Museum also sheds light on the food culture of the city by displaying living and cooking spaces such as "tandır" (oven made in a hole in the earth), dining room, "zahire" (store of grain), guest room, "kiler" (cellar), living room and bridal chamber. Visitors of the museum find opportunity to take a journey through time and immortalize the beauties they witness through photographs that they take.

Head of Şanlıurfa Metropolitan Municipality Tourism Publicity manager Necmi Karadağ told Anadolu Agency correspondent that many museums have been put into the service in Şanlıurfa recently.

Karadağ said the Kitchen Museum is very important to promote the food culture of the city, adding "the tourists show great interest in the museum as it is possible to find every object authentic to Şanlıurfa's kitchen culture." The museum tries to pass down the rich food culture to future generations as much as they can, Karadağ continued. Moreover, the recipes which are almost forgotten are kept alive thanks to the courses opened at the museum. Sevgi Erer, one of the visitors of the museum said she was impressed by the place and spent a jolly time at the museum. Examples of Urfa's cuisine include:

Mırra: Mırra is a bitter coffee authentic to Şanlıurfa. It is prepared after brewing it a couple of times. The name "Mırra" is derived from the Arabic word "murdan" which means bitter. Mırra, which holds an important place in the region's culture and requires special effort for its presentation, is also a significant part of daily life in Şanlıurfa. Mıra is not made from a special coffee bean; the coffee beans are roasted and slightly pestled in a mortar. Today, the pestling is also done in grinder and coffee machines.

İsot: İsot is the name of an authentic pepper grown in Şanlıurfa as well as the dries pepper which is identified with the city. During summer, Şanlıurfa's pepper is placed on a clean ground which faces the sun after cleaning its seeds. The pepper is waited maximum three days under the sun; first day, the pepper is red, turns into purple after the day two and black in day three. The black colored pepper is pestled and becomes isot after adding olive oil and salt.

Çiğ Köfte: The raw meat dish is made by mixing bulgur wheat, onion, spices, tomato sauce, parsley, isot (red peppers), mince. It does not need cooking and served in the shape of thin and squeezed meatball pieces on lettuce. In certain regions, it is also served in lavash, a kind of traditional bread and Şanlıurfa locals prefer to eat it without lettuce or lavash. It is recommendable to consume it in a short period of time because bulgur wheat can easily spoil.

Patlıcan kebabı (Eggplant kebab): Unique to the city of Şanlıurfa, eggplant kebab, also called as "kazan kebabı" (pot kebab) is generally consumed in summer months. Meat, eggplants and some other vegetables are put on a spit and cooked together.