Turkish chefs making their mark on the world stage 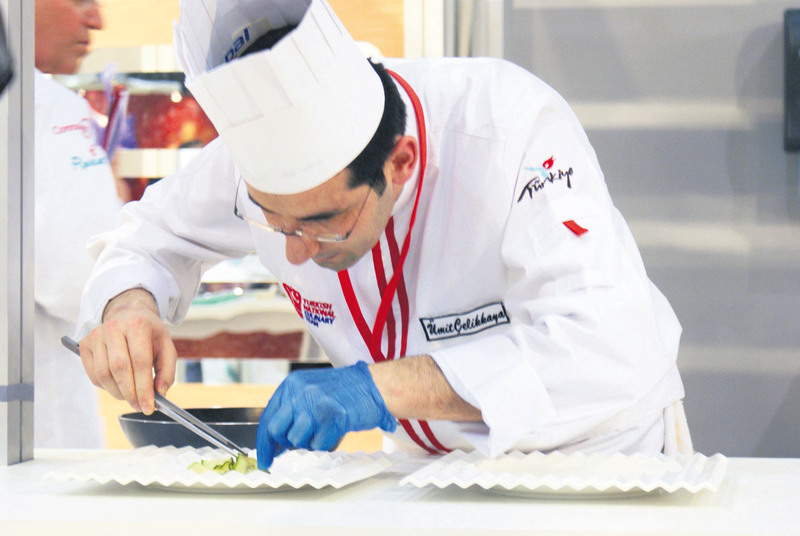 The preference for Turkish chefs who specialize in Mediterranean, Ottoman and Turkish cuisines is increasing every day, and growing success in international culinary competitions has especially paved the way for their international recognition

Turkey Cooks and Chefs Federation (TAŞFED) President Yalçın Manav has stated that Turkish chefs are very successful in the international arena and that many five-star hotels and prominent restaurants all over the world prefer Turkish cooks.

Speaking to an Anadolu Agency correspondent about the success of Turkish cuisine chefs, Manav pointed out that London has hosted the Culinary World Cup every other year for the last 68 years and said that the Turkish National Team of Cooks compete at the world cup if the date of the organization does not overlap with the date of the Istanbul International Culinary Days. The Turkish team of 14 chefs won 11 gold medals as well as nine silver and 11 bronze medals at the Culinary World Cup that took place last May. The Turkish team erected statues made of oil and sugar that drew enormous attention during the organization. Moreover, the Turkish team caused a stir at the most prestigious and tough competition of the gastronomy world, the Luxemburg Chef's Cup, which is held once every four years and hosts 107 countries. During the competition, which took place in November 2014, the Turkish Team won five gold, nine silver and 11 bronze medals.

Although the World Association of Chefs Societies organizes over 65 international culinary competitions throughout the year, the Turkish team cannot attend all of them due to financial difficulties; however, despite all hardships, Turkish chefs have been developing their skills by attending several international competitions. Currently, there are six or seven culinary schools in Istanbul. "If there are more schools, we will be able to provide better training for future chefs. There are 100 young cooks in Turkey and 60 chefs who are members of the national team," Manav said.

Stressing that each national team presents one authentic meal of their country, Manav said: "We use Turkey's own flora while preparing that meal. There are more than 3,700 different flowers in Turkey. We use a list of meals where we use 1,150 different flowers and plants. When we use all of these, striking meals come into being."

Manav highlighted that they won at least a gold and silver medal at every organization they attended and that cooks who specialize in Mediterranean, Ottoman and Turkish cuisines improve their skills at these competitions, as they get familiar with other international cuisines. "Turkish chefs stand out among others thanks to their practical intelligence. This is a fact that no one can deny," Manav claimed. "For instance, eggplant was introduced to Europe by Indians, and it took a long time for the Ottomans to be familiar with this plant. According to our research, there are 17 different meals in India in which they use eggplant. However, there are 263 different eggplant dishes and desserts in Turkish cuisine, although the Ottoman Empire was introduced to eggplant 200 years later than other countries," continued Manav.

He stated that there are 100 member countries in the World Association of Chefs Societies, but only 21 countries, including Turkey, have been able to claim titles at the international organizations. "Our cooks and chefs are successful worldwide," Manav said. According to him, this success is related to the excessive number of cuisines that are embodied within Turkish cuisine. "Turkish chefs are the most successful chefs in the world. Moreover, Turkish cuisine ranks higher among other cuisines in the world," he continued. He said Turkish cuisine has a wide range of meals, and it is not all about kebab or döner. "Turkish cooks stand out with their hard working personalities and practical intelligence," he added. The managers of renowned restaurants and hotels from New York come to Turkey to audition Turkish chefs. "When the chefs leave for New York, they receive their residency permits in six months. All their expenses are covered by the managements," said Manav. According to Manav, every year, 150 Turkish cooks and chefs leave for other countries, especially New York. "However, there is a chef shortage in Turkey. The number of culinary schools should increase. We educate them so that they can work all over the world. Everybody, including ministries, nongovernmental organizations and hotel managements should work hand in hand," he said.

Saying that Turkish cooks and chefs are preferred all over the world, Manav noted that the kitchens of 72 big hotels in Istanbul are run by Turkish chefs. He said there should be organizations in the big capitals of Europe as well as the world to introduce Turkish and the Ottoman cuisine. He added that Turkish culture and art could be promoted through these kinds of organizations.

The president of TAŞFED underlined that Turkish cuisine is loved by many people in the world and said the flora of Turkey, which has a wide range of flowers and plants, are favored by gastronomy circles. Stating that the number of meals in Turkish cuisine is higher than the number of meals in English and French cuisines, Manav concluded by saying that books on Turkish and the Ottoman cuisines can be printed in foreign languages and sent to European countries.
Last Update: Mar 02, 2015 10:17 am
RELATED TOPICS