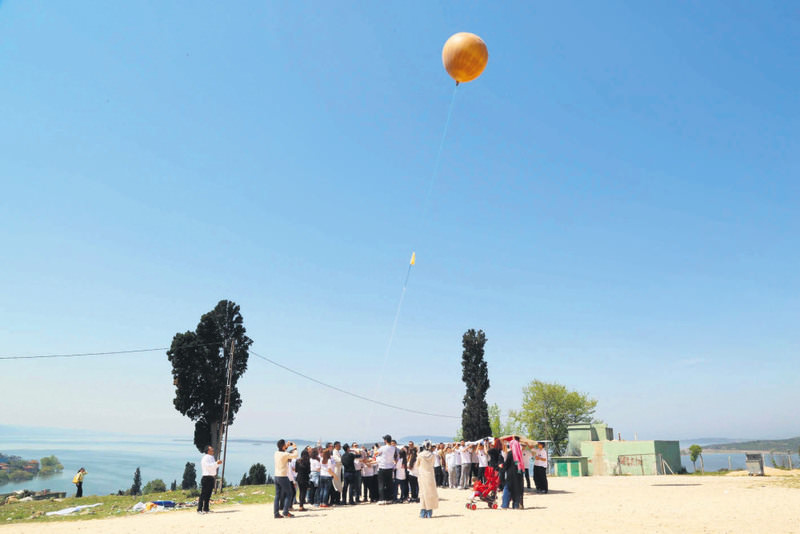 by Anadolu Agency May 01, 2015 12:00 am
A pastry chef from Turkey has sent 600 grams (1.3 pounds) of cheese pastry 39 kilometers (24 miles) high in a helium balloon and released it into the stratosphere over northwestern Turkey.

"We placed the pastry along with a Turkish flag in a special high-altitude balloon and flew it 39 kilometers (24 miles) high into the stratosphere. The whole journey took four hours," Hasan Acar told journalists following the event, which he said was performed with the intent of promoting Turkish pastry.

Acar said that the helium balloon was brought from Hong Kong specifically for this purpose, as it was not available in Turkey.

"We have been working on this for the past two months. We flew the balloon with a group of 100 students. The pastry was up in the air for about half an hour before it landed 95 km (59 miles) away in a field," he said, adding that they were able to locate the pastry box with the help of a GPS navigation device attached to it. Acar said that the whole journey was recorded with a mini camcorder on the balloon, and the pastry remained unspoiled after hitting -60 degrees Celcius.

"We will vacuum this pastry and store it in our cafe. But I would like to present the Turkish flag to President Erdoğan," he said.

This may be the first time cheese pastry has been launched into space, but Acar is definitely not the first person to come up with the idea.

Time magazine reported on April 15 that the brothers Alexander and Benjamin Jönsson from Lysekil, Sweden, crossed the border into Norway and on April 8 attached a doughnut and camera to a weather balloon, launching the contraption almost 20 miles above the earth's surface, citing a local news outlet.