For Ethiopians, coffee is more than just a drink 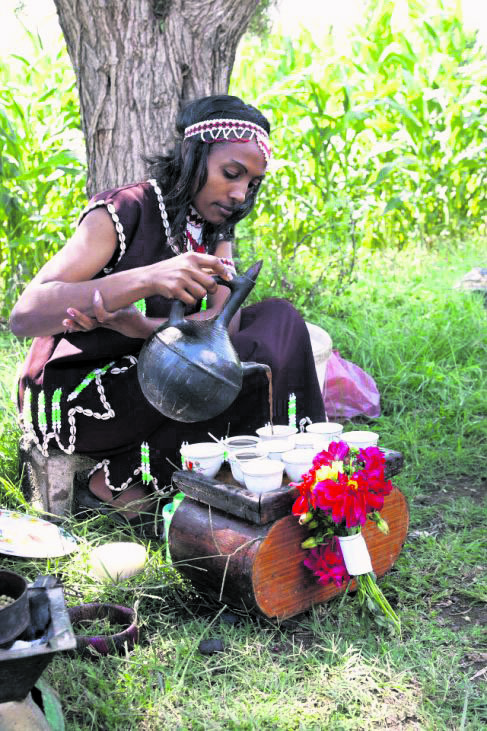 Having become an indispensable drink for waking most of us up, drinking coffee means a lot more for Ethiopians who use it at family gatherings, prayer ceremonies and as a source of income

Ethiopia is famous for producing some of the finest specialty coffees, such as Yirgachefe, Sidamo and Harar. In a tiny mud house in a village near Addis Ababa, the family of Roman Belay gathers each day around a small coffee table called a "rekebot" for a traditional coffee ceremony.

"The coffee ceremony is a special occasion for my family during which we think and feel the presence of God," Roman, a 47-year-old stay-at-home-mom, told Anadolu Agency as she poured the traditionally brewed coffee into rows of china cups laid out on the rekebot.

For Roman and her family, the ceremony provides a chance to bring family members together and visit neighbors to chat, gossip and discuss daily life. Every day, Roman's family sits around a small furnace on which a clay kettle boils on smoldering charcoal. They usually receive visitors who come for the festive mood and delicious coffee. "We discuss ways of making peace between family members or neighbors when they fall out," Roman said. "It is a peacemaking kind of culture that we feel lucky to be part of."

Roman says she rarely goes to bed without sipping the tasty stimulant. "I am addicted to brewing coffee three times a day. I love to see my husband and children gathered around me in the coffee ceremonies," she said. Roman's husband, Tekalegn Tolossa, shares his wife's love for coffee, but also attaches a tinge of spirituality to the tradition. "The ceremony is a sign of peace and the presence of the spirit of God," Tekalegn said, sipping his coffee."During the ceremony, we pray to God that he make us happy." "Whenever Roman misses her coffee during the day, her mood changes noticeably," he said, laughing. "Even when I am not on good terms with one of my family members, I try to avoid problems while coffee is being served," he added.

Tekalegn's family is not alone in enjoying coffee, Ethiopians are famous for their love of it.

Equally, Ethiopia is famous for producing some of the finest specialty coffees such as Yirgachefe, Sidamo and Harar. For Ethiopia, coffee - the second most traded commodity in the world after petroleum - represents the country's main export earner.

However, the local population ends up consuming half of national production, as coffee-centered gatherings are a widespread social ritual. "Before the 16th century, coffee, which was condemned religiously by both Catholic and Muslim communities, is now an integral part of [social] rituals in Ethiopia and across the globe," Ahmed Zakaria, a senior advisor for the Institute of Ethiopian Studies, told AA.

"The ban was issued in light of coffee's stimulating nature," he said. "But Pope Clemant VIII of the Roman Catholic Church allowed coffee to be drunk among the faithful in the late 16th century."

According to him, coffee - locally called "buna" - was also condemned by the Ethiopian Orthodox Church until the reign of Ethiopian Emperor Menelik II, who ruled from 1889 to 1913. Later, however, he said the beverage became linked with religious rituals among the country's Christians and Muslims.

"The coffee-drinking gatherings would create strong bonds of love among the faithful and help them strengthen their religious commitment," Zakaria said.

Many families, he said, gather for the coffee ceremony to ask God to protect them, let them live in peace with the people they meet and live their lives in a godly manner. The coffee that is generally drunk at home has also become an outdoor business with the beverage now being served in hotel lobbies, restaurants and on the roadsides of Addis Ababa and other big Ethiopian cities. The phenomenon has lured many women to begin small businesses by serving coffee to passersby on the streets.

Selam Kahssay, 23, for example, began brewing coffee three years ago in a small shop on the sidewalk of Addis Ababa's Haya Hulet neighborhood. "When I started this business I was afraid it would not be feasible," Kahssay told AA. "But my brother who provided the seed money - about $700 - and encouraged me to try it."

"Fortunately, it has been a success," she said. "Now I earn an average of $10 per day." Helen Ezira, 45, who opened a coffee shop adjacent to Kahssay's, said that "serving coffee outdoors is a sustainable business through which I make profits."

"I have many customers who frequently drink coffee here," Ezira said. She noted that her average daily income from the sale of brewed coffee was at minimum $12, which allows her and her three children to lead decent lives. "I didn't think such a business would help me win my daily bread, but once I engaged in it, I realized it could," she said, smiling.
Last Update: May 20, 2015 10:41 pm
RELATED TOPICS