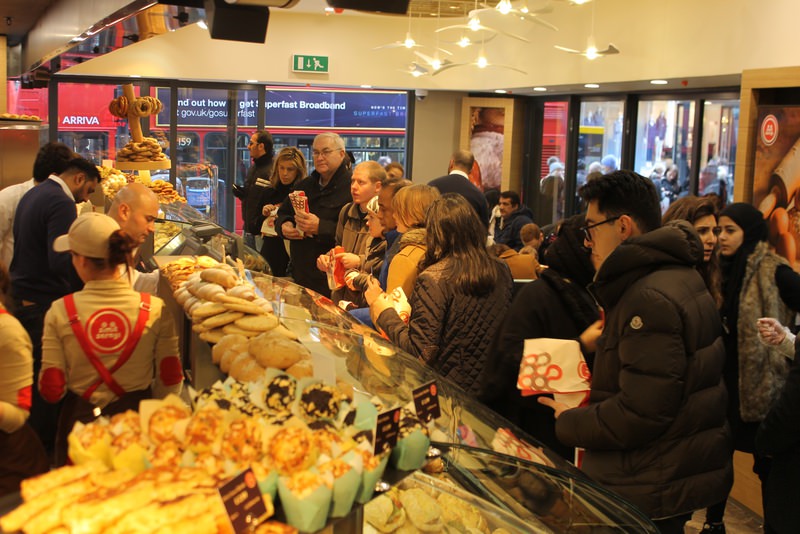 by Daily Sabah Aug 25, 2015 12:00 am
Gradually becoming a world brand, Simit Sarayı, a popular food chain selling "simit," a sesame bagel, opened its third London branch last month in Piccadilly Circus, one of the city's most famous and hectic avenues. Setting the mission of becoming the most recognized and widespread food chain in the word, Simit Sarayı continues to offer the traditional Turkish taste in London. It opened its first franchise in London on Oxford Street back in February. Attracting both British and Turkish customers, a second branch was opened on Bond Street two months later. CEO Abdullah Kavukçu said they were proud to open the third shop within only a year, praising customers' great interest. "We are planning to open four more shops by the end of this year. London is the main headquarter of Simit Sarayı in Europe. We will manage all our shops in Europe from London," Kavukçu said, adding that the company is aiming to increase the number shops in Germany, Belgium, the Netherlands, U.K. and Sweden.

The new Simit Sarayı in Piccadilly Circus will be open from 9:00 a.m. to 12:00 a.m. Sunday through Wednesday and 9:00 a.m. to 2:30 a.m, Thursday through Saturday. The menu features simit with different content like Nutella, avocado and smoked salmon. Pizzas, simit sandwiches with cheddar, chicken, pickles or tuna; baget sandwiches, cold and hot beverages, cookies, cakes, traditional pastries like börek as well as dürüm and pide are also included on the menu. Decorated with neon lights for over a century, Piccadilly Circus will presumably draw more tourists with the newly opened shop.
Last Update: Aug 25, 2015 1:10 am
RELATED TOPICS