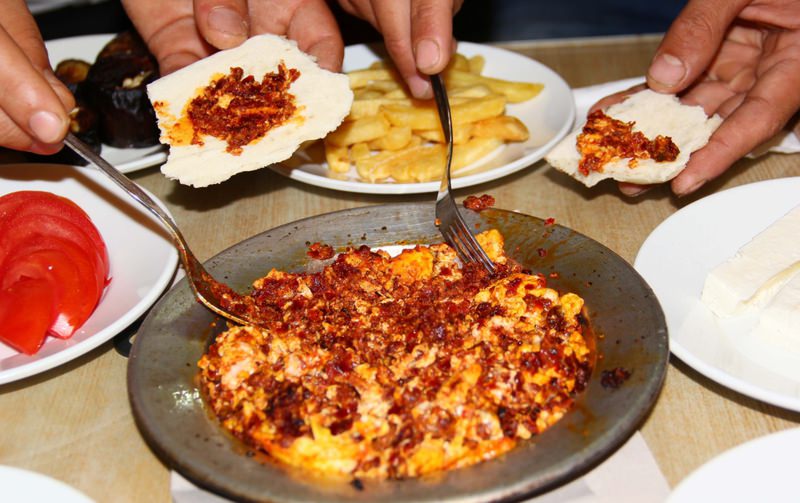 by Anadolu Agency
Oct 15, 2015 12:00 am
After hours of preparation, jam made from red peppers ("isot" in Turkish), which is unique to the southeastern province of Urfa, has a distinct taste, and the dish colors the breakfast tables of locals from the area. Families earning an income selling jam made from isot first clean the peppers of dust and dirt. The peppers are separated based on their quality and then divided into pieces in a machine. Later, they are spread on a large plastic cloth and stay outside for 12 hours to get fresh air and stay cool. Following this stage, they are crushed in another machine and spread in pools. They are salted and mixed every hour until firm without forming foam. Crushed peppers are dried in the sun for about three days, depending on the temperature. Olive oil is added to so that the jam can take its final form. Mostly local women take part in the preparation of jam from isot peppers. The jam is distributed in jars and sold in local markets.

Mahmut Polat, a local resident living in Sırrın, makes jam with isot peppers in a tent set up on an available field. For the last 15 years, Polat and his staff have been making jam from isot peppers in the autumn months and continue to earn their living selling the jam. Polat said that they do not add preservatives to it. They add nuts, walnuts or almonds according to taste. Highlighting the difficulties of preparing the jam, Polat said that the most distinctive difference is that the peppers grown in Şanlıurfa never harms the stomach or intestines. "This is the biggest difference between Şanlıurfa peppers and other types. It is because of the soil type. Even if you plant sweet peppers brought from another city in Şanlıurfa, they turns into hot peppers," Polat said.

Jam seller Yusuf Demirtaş said that jam made from isot peppers is largely consumed in Şanlıurfa and has yet to fully spread to other cities. He said that this jam is consumed mostly in the autumn and winter months. "We sell jam without preservatives. Sometimes customers add dried nuts to it. We sell it for between TL 12 ($4) and TL 15. Jam made from isot peppers is an indispensable part of our breakfasts," he concluded.