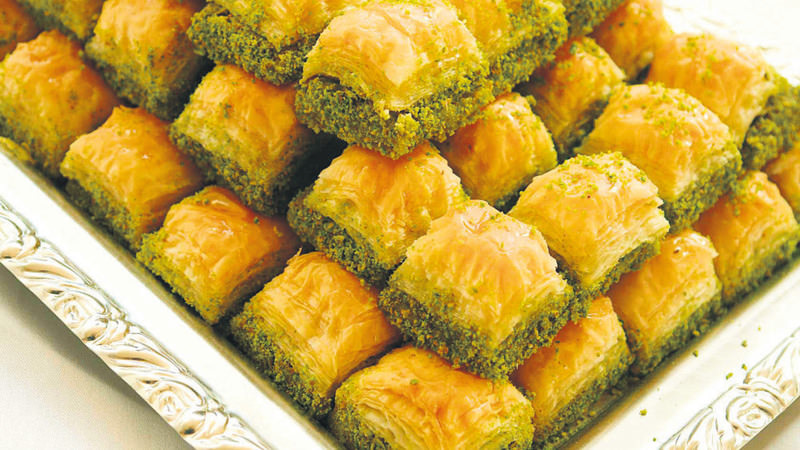 by Handan Kazancı Jan 04, 2016 12:00 am
The cuisine of Turkey's southeastern province of Gaziantep earned praise earlier in December when it was added to UNESCO's list of "The Creative Cities' Network." The network on culinary science launched in 2004 and comprises of 116 cities worldwide. Among them, the ancient city of Gaziantep - also known as Antep - is a treasure trove of premiere delicacies, including the filo-dough treat, baklava.

Indeed, nearly 1,100 kilometers away from Istanbul lies the home of the flaky dessert. Characteristic of the cuisine of the Ottoman Empire, baklava is rich and sweet, with layers of filo pastry filled with nuts and syrup. This pastry is one of the most popular sweets in Turkey, the Middle East and Balkan countries, enticing locals and tourists alike. Just a few steps away from the Bosporus, Karaköy Güllüoğlu is a baklava bakery owned by the Güllü family from Antep, like most baklava producers in the country. The high-end, 300-square-meter baklava bakery, which opened in 1949, sells almost 3 tons of baklava during religious festivals and New Year's Eve, according to Hasan Akbıyık, 62, a salesman at the Karaköy Güllüoğlu. According to "Baktad," an Istanbul-based association on baklava and dessert production, Turkey produces about 950 tons of baklava daily.

The average person consumes about 4.4 kilograms of baklava per year, according to a statement from "Baktad" to the Anadolu Agency (AA). The industry employs more than 60,000 people in around 25,000 companies across Turkey, making an annual domestic turnover of roughly TL 8.5 billion ($2.9 billion). While the industry's baklava exports amounted to $1 million in 2005, that number rose to more than $4 million in 2014. Turkey mainly exports baklava to the U.S., Germany, and Saudi Arabia, according to information from the association.

How to make baklava

The chairman of Karaköy Güllüoğlu and a master baklava baker for more than 40 years, Nadir Güllü, 60, described the key steps for making baklava to the Anadolu Agency (AA). He said that the ingredients for Antep baklava, which was given protected status by the European Union in 2013, should be grown locally during the right seasons. "The main source of the good taste of baklava," according to Güllü, are pistachios which should be picked in Antep in August when the protein levels are higher, rather than in September, when they are usually harvested. "Walnuts should be brought from [Turkey's northern province of] Tokat during September and October," he adds. And the butter for a baklava should be made from the milk of sheep and goats that are fed untrodden herbs of the Harran Plain in southeastern Turkey. "The animals should be eating those herbs during the spring months of April and May," he says.

While the flour for baklava should come from Turkey's central Anatolian province of Konya or southeastern Urfa, Güllü said that the water used for baklava should not be chlorinated. Güllü has a very definite idea of what good baklava should be. "First of all, it should be gold in color," he says. "Secondly, when you smell it, you should be able to understand if the ingredients are natural or not. Third, when you put your fork into the baklava you should hear a crispy sound, which indicates how thin the 40 layers of rolled dough are." Lastly, one should chew the baklava slice five times in order to understand the pistachio aroma, he adds. The Karaköy Güllüoğlu bakery attracts around 3,000 people on an ordinary day. This number increases to 6,000 on the weekends, according to Akbıyık.Baklava is also one of the main souvenirs that Turks or foreigners bring back to their friends and family. One of the customers in the bakery is Chloe Marie, 38, a social worker from Switzerland who is in Istanbul for a five-day holiday. Her first taste of a baklava was in her home country years ago. "I just love it," she says, adding that each time she is in Istanbul, she tries the filo-based sweets. The best baklava is the one with pistachio, she adds.Akbıyık, who has been serving baklava for more than 40 years at Karaköy Güllüoğlu, believes that baklava makes people joyful: "I don't know why. Maybe it is psychological; when people taste baklava, everybody laughs, [they are] happy."
RELATED TOPICS