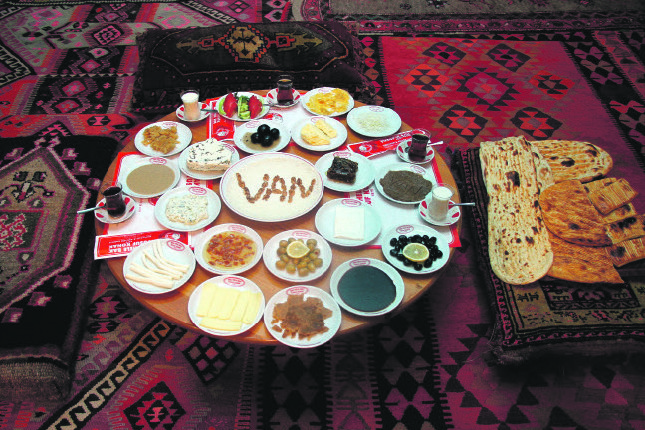 by Anadolu Agency Nov 23, 2016 12:00 am
Being Turkey's "most crowded breakfast table," the Van breakfast has been licensed and will be promoted as a special brand with the initiatives of the Turkish Patent Institute (TPI).

Breakfast culture in the eastern province of Van is renowned across the country. A Van breakfast starts with traditional Turkish breakfast items, such as olives, omelets, menemen - scrambled eggs cooked with tomatoes, green pepper and spices - honey with kaymak (clotted cream), homemade jams, fresh cucumber and tomatoes, then an array of Van cheeses, herbs, the famous Van honey and pekmez - molasses made from the grapes of Van.

In 2014, Van set a world record for the most crowded table, surpassing the one belonging to the U.S. with 18,941 people. The record was broken with almost 52,000 people. In order to break the record, 25,000 chairs and 6,000 tables were set up in a field. Those who failed to find a table brought their own tablecloths to sit on the ground.
RELATED TOPICS